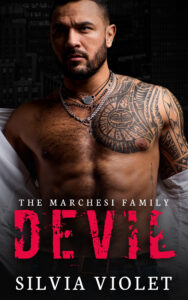 Devil is a mobster with a dangerous secret...

There's a cop who hates him.

A cop he caught and released.

A cop he can't get out of his mind after the one forbidden night they shared.

“Why were you watching me?”

“I was watching everyone.”

“Then walk away.” The bastard was challenging me when I had a gun to his head and had just shown him I wasn’t exactly stable. It was like we were made for each other.

“Maybe I’d rather shoot you.”

He continued to hold my gaze as he shook his head. “That would be a very bad idea.”

When I caressed the side of his face with the barrel of my gun, heat flared in his eyes. He held himself still, and nothing about him betrayed the fear any sane man would feel. I pushed against him, pinning him more tightly to the wall, and realized he was as hard as I was.

“You don’t want me to walk away, do you?” I ran the tip of my gun along his jaw then over his lips, wishing it was my cock touching him. He shuddered, and I reached down and palmed his erection.