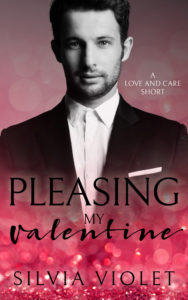 The next week, Foster asks Oren to dinner with the intention of finding out what he was seeking at the club. The shy musician confesses his forced seduction kink, and Foster can barely contain his excitement.

When Foster proposes they explore Oren's fantasy on Valentine's Day, Oren knows this will be the first year the holiday brings more pleasure than pain.

I couldn’t believe I was here. I’d fantasized for years about dominant men controlling me, forcing me, making me do exactly what they wanted. What would it be like to get out of my head for a while, to give someone else control?

I’d never tried it, never even come close. Because in reality, I was all about control. My days were regimented. I woke up at 4:30 AM, worked out, ate breakfast, practiced my violin, and headed to the university to teach my classes. I always made sure I was scheduled for morning ones only. My lunch was the same every day: an apple, a banana, and a chicken salad sandwich on sourdough bread. After lunch, I taught private lessons and ran rehearsals. My evenings varied out of necessity but were typically dedicated to performances—both ones I was in and ones I wanted or needed to attend—rehearsals, or private practice.

I paid the entrance fee and considered getting a drink, but I rarely drank so my tolerance was almost non-existent, and I needed to be sober for this. I had to be in control to consider giving that control up.

The young man who’d greeted me at the door explained how to get to the public play room where I could watch couples or groups doing scenes. I headed there, heart pounding. I could do this. I was just here to observe. I didn’t have to even talk to anyone if I didn’t want to.

When I stepped into the room, my senses went on overload. There were sounds of pleasure, of hands or leather implements striking flesh, and there was so much skin. I felt overdressed in my dark jeans and button-down, even though it was quite casual for me.

I tried to focus on individuals. There was a man in a puppy mask being led around on a leash, a woman in a sex swing with two large dildos being inserted into her, and a man in heels and lace panties bound to a spanking bench. The next person I focused on had my breath catching in my chest. Dr. Foster Harrington, professor of English, and man beautiful enough to be a god, was working his fingers deep into the ass of a man whose arms were chained over his head, lifting him so high only the balls of his feet touched the floor.

The man was naked, but Foster was wearing black jeans and a black t-shirt. I’d never seen him in anything but khakis and a tweed jacket. I didn’t truly know him, but I’d made a point of finding out what I could about him. Not that I was a stalker or anything. But he ate lunch on the same patio I did every day that it wasn’t raining. Just like me, he always sat in the same place. And I’d become intrigued by him. All right, fine, I had a terrible crush on him, which was pathetic considering I’d never even spoken to him. I wanted to, and every day I tried to think of something to say, some reason to go over and talk to him, but everything I came up with was inadequate to say to such a man.