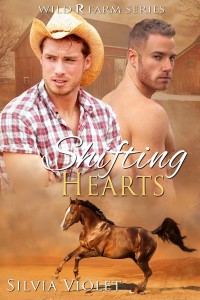 After experiencing what happens when someone you love walks away and never looks back, Brandon decided love was for fools. Then he spent a summer with Zach. He struggled against feelings that grew every time he and Zach were together, telling himself they were just having a fling. When Zach confessed his love one hot summer night, Brandon panicked. He scoffed at Zach and made sure he walked away first.

Three years later, their paths cross again when Zach becomes the vet at Wild R Farm where Brandon works. Brandon realizes his feelings haven’t changed, but Zach treats Brandon with scorn despite Brandon’s every attempt to show Zach he’s no longer the self-centered man he used to be. When a night out ends with Brandon driving Zach home, confessions are made on both sides, and hope begins to build in Brandon’s heart.

Buy it at Smashwords »

Brandon settled his and Zach’s tabs and managed to get Zach to his truck without incident. “Did you drive here?”

“Nope, Martin picked me up.”

Brandon snorted again. Fucking Martin. The two of them together was so not going to happen.

Zach giggled. “I’ve always loved it when you go all ferocious stallion.”

Oh fuck. “Just get in the truck, Zach.” Brandon helped him step up and maneuver himself into the passenger seat.

“It’s fucking wrong.“ Zach said as he laid his head back on the seat.

“That you’re so fucking hot.”

No. No, no, no. This was not happening. “Just close your eyes and stop talking. You’ll be better off that way.” Maybe he’d pass out and then Brandon’s dick could stop reacting to his soft words and beautiful eyes and everything that made him the only man Brandon really wanted.

“No, I’ll forget it all. Best thing about being drunk. I might as well say what I want because who will care later.”

“Nah, you never did. That’s what makes it so unfair.”

Brandon rubbed his forehead, trying to ward off a massive headache. “You’re wrong about that. I—”

“What? You didn’t mean to look at me like I was a bug you wanted to squash when I said I loved you?”

“You’re drunk. Really fucking drunk, and I’d be an idiot to say anything now. More of an idiot than I already have been and—”

Brandon scowled at him. “Nope, it’s your imagination”

Zach grinned. “You could kiss me to shut me up.”