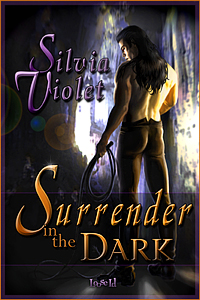 Surrender in the Dark by Silvia Violet

Blurb:
Radek, king of the Underworld, knows that Nia is destined to be his. Yet as the crown princess of Upperworld, Nia is unavailable to him. Desperate to claim her, Radek puts the safety of his own colony at risk and lures her to him by seducing her in his dreams.

A progressive ruler, Nia believes in the importance of modernization. But as princess, her say is limited. Her mother, the Queen of the Upperworld, forbids the Underworld’s king from attending Nia’s crowning. So when a man from Underworld invades Nia’s dreams and invites her below, she accepts the offer, hoping for an audience with the king

Nia’s society expects women to dominate in bed, but Radek draws out her hidden desires. How can serving him be so deeply thrilling? Even when he shows her the pleasure in pain, she craves more of his brand of dominance.

She hesitated. He wrapped her hair around his wrist and jerked her toward him. “Now.”

Her tongue snaked out, licking the head of his cock. He sucked in his breath. Her tentative strokes fired him in a way the most experienced slave never could. “Take me into your mouth.”

Fear showed in her eyes, but Nia did as he bade. He fisted his hands in her hair, longing to feel the back of her throat, but resisting the urge to thrust deeper. He wanted her to love serving him this way, to relish being on her knees in front of him. Only after she had would he show her the sweet agony of swallowing him whole.

She groaned, but managed it.

His knees threatened to buckle as the heat of her mouth surrounded him. “Suck.” The single word was all he had breath for.

Within seconds he would have sworn she’d lied about her experience. Her mouth brought him exquisite pleasure, and he didn’t need his Lalatian senses to know desire fueled her enthusiasm, along with her natural need to serve. He could smell the hot cream dripping from her cunt, and he wanted to taste it as much as he wanted to draw his next breath.

The rhythm of her sucking quickened, and she swirled her tongue around his shaft with as much skill as any woman in his harem. His climax rose. He tightened his grip on her hair, thrusting into her as she sucked. “Swallow as you feel me come in; see how much of me you can take.”

Fear returned to her eyes. She tried to pull back, but he held her firm. “Trust me to know your limits.”

Nia whimpered, but ceased her struggles.

“I’m going to come in your mouth, and you are going to take it like the gift it is.”

Her eyes widened as he thrust into her mouth, holding her still. A few strokes later, he felt her surrender.

Buy it at Loose Id

Buy it at All Romance eBooks