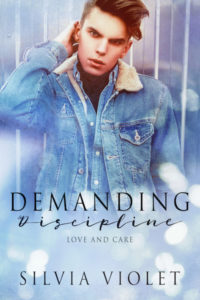 I glared at the very tall, very muscular, very confident man in front of me. “What if I don’t want to?”

Blake raised a brow. I was naked. He’d commanded me to strip and I’d obeyed, thinking he would do the same, but he was still wearing his faded US Navy t-shirt and dark jeans. And a belt. A wide leather belt I knew would feel delicious on my ass, but I’d never tell him that. I wanted him to work for the privilege of spanking me.

“You do.” He said it like he had no doubt. I got the feeling he didn’t have doubts about much.

I turned and walked across his bedroom, tightening the muscles in my ass to give him the best view.

I wanted to. I wanted to be at his feet, but I couldn’t just give in. That would mean… I wasn’t sure exactly what, but it wasn’t who I was. I didn’t take orders. I loved to be spanked, to be fucked hard and held down, but I didn’t actually want to be a man’s submissive. So many Doms I’d met took everything way too seriously anyway. I liked sex, and I liked games. That’s all this was, a game. Except Blake didn’t seem to agree.

“You will.” He remained just as confident as he’d been since he’d approached me at Thrust.

I walked around the room, glanced out the window, and finally came to stand by Blake again. I reached out, intending to touch his cock, hoping that would break his intense concentration. His fingers clamped around my wrist, and he squeezed tightly enough to let me know that if he didn’t want me to touch him, I wasn’t going to be able to.

Blake looked at the floor, making clear what he still wanted. I sank to my knees without further protest. Blake had this presence that made me want to obey. I wanted to hate him for it, but I didn’t.

“Better,” he said, his voice cool and even.