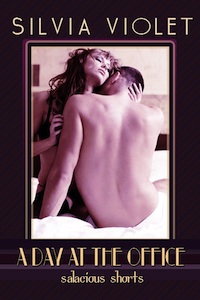 Valerie has wanted to get into her boss’s pants for months. She strongly suspects he’s bisexual, because she’s seen him giving men the same hungry look he gives her. When he makes a Freudian slip, she takes him at his word and makes plans for her and her lover to give him the night of his life.

Bill tossed a stack of expense reports on Valerie’s desk. “Would you please do me before you leave tonight?”
She grinned when her boss’s face flamed bright red. “I meant do these,” he said, his voice less confident than usual.
Valerie’s lips curved into a mischievous smile. She’d been waiting for an opportunity like this one for months. “I prefer the first request.”
His eyes widened. “I really didn’t mean…”
She glanced around the office. No one was watching them. Lowering her voice to a whisper, she took a chance. “You want me, don’t you?”
Bill swallowed hard and adjusted his tie.
She pressed her advantage. “Are you working late as usual tonight?”
He nodded. He worried his lower lip and looked incapable of uttering a word.
Valerie wasn’t deterred. “It’s a date. I’ll be here around nine.”
He found his voice. “You have a boyfriend.”
“Yes, I do,” Valerie responded.
“Look, I —”
She held up her hand to stop his protest. “I’ll bring him.”
Bill made a strangled sound.
“I’m onto you. You look at Max from accounting the same way you look at me.”
The color drained from her boss’s cheeks and he shook his head vigorously. “I don’t.”
“You do. Not that I blame you. Max is seriously hot. If you like him, you’ll love my Adam.”
“Listen, Valerie. I don’t think—”
“And you shouldn’t. You should just do this. If you don’t learn to unwind, you’re going to snap. Then I’ll have to break in a new boss, and the chances of finding one as cute as you are close to nil. So I’m going to see that you get what you need.”
Bill turned and entered his office without saying another word. When he closed the door behind, Valerie let out a giggle. She didn’t manage any useful work for the rest of the day.