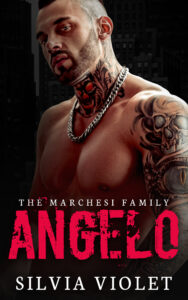 Cameron didn’t realize how much he loved his grandparents’ bakery until Angelo Marchesi, a man he’s hated since high school, threatened to take it away.
But Cameron owes Angelo a debt.
A debt he can’t pay…
Unless he accepts Angelo’s indecent proposal and risks finding out how thin the line between love and hate really is.

I closed my locker and turned to go to class. But there he was, like a brick wall in front of me. Angelo Marchesi. All six foot three of him, looking so much older, so much more muscular than he should at sixteen. He was dangerous, an asshole and a troublemaker, yet he made my skin flush every time he came near me. He’d pushed up the sleeves of his uniform jacket as usual, rolling his shirtsleeves over them. His tie hung loose and he hadn’t bothered to button his shirt all the way. I had to look away from the exposed slice of tanned skin and clear my throat before I could speak. “Excuse me. I need to get by.”

“Hold up genius,” he said, placing a hand on my chest. It was enough to immobilize me. If a person were being kind—and most weren’t—they would refer to me as lean. I was scrawny. Angelo had one thing right, though. I was a genius. That was how I’d gotten to Saint Margaret’s. Natural intelligence plus some hard work.

“I don’t want to be late.” For some reason a few weeks into the school year, Angelo told the rest of the school bullies to back off that if I needed to be put in my place he would do it. He’d occasionally tease me by calling me “Genius” or “Nerd Boy.” One time he threw an apple core in my locker as he walked by, but mostly he left me alone. I didn’t trust him though. I kept waiting for the other shoe to drop, for him to say I owed him.

Angelo huffed. “Why the fuck do you care? You got A’s in everything, and all the teachers love. You could tell them anything and they’d believe you.”

Unlike Angelo, who was on pretty much every teacher’s shit list. If it wasn’t for all the money his father gave to the school, he’d have been kicked out months before.

“Sit next to me in math,” he demanded.

“Devil always sits next to you.”

He grinned. “Nice to see you noticed.”

If this were an alternate universe, I would think he was flirting with me. But he was straight, and no matter how much the kids speculated about me being gay I wasn’t stupid enough to be open about it. Besides, if a guy like Angelo was actually flirting with me, it would only be because he wanted something.