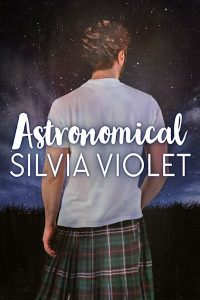 When sexy, kilt-wearing astronomy professor Greg MacIntyre moves in next door, Blake Theriot knows he's in trouble. Blake is a research librarian, and he likes things orderly and controlled, except in his secret fantasies where he craves a big, powerful man like Greg to shake things up.

Every time Blake tries to talk to his erudite neighbor, his brain shuts down and his vocabulary consists of one-word utterances. When a few shots of after-dinner whiskey loosen Blake's inhibitions, the two men share a hot kiss and the promise of more. If Blake can let go enough to give Greg a real chance, his life might be forever changed.

**This book was previously published. It has been re-edited for this release.**

When I reached the yard, my heart nearly stopped. Greg was indeed outside, up a ladder, fixing a broken gutter, wearing nothing but a utility kilt. A fucking kilt. Could he get any more perfect?

I stared, frozen to the spot. My mouth watered as I took in his muscular legs, his round ass, and the broad expanse of his back. He reached up to hook the gutter back in place, and I bit my lip to hold in a groan at the sight of his muscles flexing.

“Uncle Blake?” Haley snapped me out of my trance. “Are you okay?” she asked.

Her lips turned up in a mischievous grin. “You like him, don’t you?”

She rolled her eyes. “Dr. MacIntyre.”

I prayed her loud whisper hadn’t carried across the yard. “He’s a nice man.”

Not a conversation I wanted to continue. “Come on. Let me introduce you.”

As we got closer, I had to resist the urge to look up Greg’s kilt. Sweat rolled down my temples as I wondered whether he was naked under there. At least in the Louisiana heat, everyone was sweaty.

He looked down and smiled. His green eyes sparkled, and my cock responded. I so didn’t need to be standing there with a hard-on.

“I know you’re busy, but I wanted to introduce you to Haley.”

“Hi, Haley.” He waved at her, and she blushed a deep red. Even ten-year-olds couldn’t resist him.

He started down the ladder, his kilt lifting with each step. I couldn’t stop myself from peeking. I nearly passed out when I caught a glimpse of his pale, ass cheek. My cock hardened more, and I prayed he—or worse, Haley—wouldn’t notice.

When he reached the ground, Greg shook Haley’s hand. “Nice to meet you.”

“Nice to meet you too. I was hoping you’d show me your telescope sometime. I’ve been reading Seeds’s Foundations of Astronomy, and I’ve got lots of questions.”

His smile widened. “Most likely you already know more than most of the freshmen I’ve taught. I’d love to answer your questions and do some stargazing together.”

I nearly swooned. Greg was hot, brilliant, and apparently also good with kids.

“There are lots of cool things I can show you. How much math have you done? Any algebra yet?”

I barely heard his questions. My gaze was glued to his hand as he ran it casually up and down the handle of his hammer. I couldn’t stop imaging him touching my dick the same way.

“I’ve been working on algebra on my own,” Haley said. “My stupid school won’t let me move ahead, and my class is still adding fractions.”

He rolled his eyes. “I’ll help you with the math too.”

Haley’s face lit up. “That’s awesome! Thanks!” She glanced at his kilt. “So are you, like, Scottish, or what?”

He laughed. “On my father’s side, yes, but I wear kilts because I like them, especially this style. It’s got lots of useful pockets and straps.” He slid the hammer he’d been caressing through a loop on the side as a demonstration. “Pants get too confining.”

My knees threatened to give as I thought about what was under his kilt, unconfined.

“Hmm.” Haley considered his statement. “I like shorts better than skirts. You can do cartwheels in shorts without showing your underwear.” She demonstrated, flipping herself over on his lawn.

He laughed. “You’ve got a point there, but it’s been a very long time since I attempted a cartwheel.”

I wondered if I could convince him to attempt one after Haley left.

Renee motioned to Haley as she exited my house and walked to the car. “Come on. We’re going to be late for your piano lesson.”

He smiled at her, and I got all wobbly again.

“Call me Greg,” he called as she ran off.

She turned back, grinning. “Awesome.”

“Haley, come on,” Renee called impatiently. She waved to Greg from her spot by the car.

Greg smiled at her, but he gave no indication he was checking her out. Renee and I were twins, and, like me, she had thick, curly black hair and dark brown eyes. Where I was tall and lean, she was short and curvy, very curvy. Straight men did a lot of staring when she was around.

Maybe Greg is gay after all. Or am I just seeing what I want to see? As I considered my track record with relationships, I doubted I could be that lucky.

Greg waved to Haley as they drove off. “Your daughter’s great,” he said, looking at me.

“What?” The word flew out as my brain worked to comprehend what he’d said. I’d been observing the hard planes of his torso and marveling at the way his golden chest hair glinted in the sun.

“Haley? She’s not my daughter. She’s my…uh…my niece.” I wished I could melt into the ground. Why did he have this stupefying effect on me? “Renee’s my sister. I’m not… I mean, I don’t have any kids.”

Greg’s emerald eyes sparkled as his gaze drifted up and down my body, assessing me. “I see.”

Is he flirting with me?

He smiled as if he sensed he’d gotten me flustered. “Are you interested in seeing the stars too?”

Was I ever, but not in the way Greg meant. At least I didn’t think he meant it that way. My cock, on the other hand, was convinced it should be ready for action. “Well… I…”

“Because I’d love to show you my telescope.”