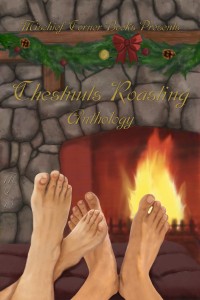 Christmas means different things to everyone, but most often it’s all about pulling loved ones close and brightening the gloom. The fire’s crackling. The snow is piling up outside, even if it’s only in your dreams. Time to snuggle up with some cocoa and some stories carefully crafted by the Mischief Corner Crew to warm hearts and cockles.

Holly Jolly – Silvia Violet
I’m not gay. I just notice men sometimes. Everybody does, right? I notice Dane a lot, like every time I’m near him, but just because I think he’s an attractive man that doesn’t mean I like him, does it?

Wreath of Fire: Smokey Mountains Bears 2 – Toni Griffin
Michael’s trying to start a new life away from his abusive father, but he’s drifting and not sure what he wants. When he accidentally starts a kitchen fire, the hot new fireman who comes to the rescue is not only another bear shifter. He’s Michael’s mate. Michael desperately needs to get his act together and figure out what he wants if he has any hope of claiming the bear fated to be his.

A Christmas Cactus for the General – Angel Martinez
Exiled to Earth for perhaps the worst failure in Irasolan history, General Teer must assimilate or die. Earth is too warm, too wet, too foreign, but he does the best he can even though human males are loud, childish louts whom he can’t imitate successfully. When a grieving seaplane pilot strikes up a strange and uneasy friendship with him, he finds he may have been too quick to judge human males. They are strange to look at, but perhaps not as unbearable as he thought.

Snow on Spirit Bridge – Freddy MacKay
Alone in Japan, Finni is struggling against the constant distrust, avoidance, and xenophobia he experiences every day. He misses home. He misses his family. Nightmares come all too frequently because of the stress, and well, Christmas is just not Christmas in Japan. Not how he understands it.

Distressed by how miserable Finni is, his roommate, Mamoru, offers to be Finni’s family for Christmas. Little does he know how much one agreement would change everything between them, because both of them kept secrets neither ever dreamed were true.

Buy it at iTunes »

Once I’d gotten away—thanks to a scholarship to LSU that allowed me to transfer from the Bible college my parents had sent me to—I realized I was absolutely right to have doubts about the beliefs I’d been forced to swallow. I stopped going to church. I started voting for liberals. I even indulged in alcoholic beverages, and after waiting longer than one might have thought possible, I had sex—out of wedlock. It hadn’t been as good as I’d expected, though. Maybe I’d waited too long, built up the experience too much, or maybe I still feared just a little bit that God would strike me down for turning my back on my promise to my parents, but sex hadn’t been as life-changing as I expected. Pleasurable, but not earth-shattering.

Would it be earth-shattering with Dane?

Where had that thought come from? The last thing I needed was another major life change. Rejecting nearly everything I’d been taught growing up was enough to last me for a few more years. I’d graduated and gotten an excellent job in the marketing department of a bank in downtown Baton Rouge. Over the last year, I’d proven I could support myself. The only way my family would help me was if
I repented and returned to the bosom of the church. I was determined to show them just how successful I could be without biblical guidance.

I hadn’t decided yet if I believed in God or not, but I definitely didn’t believe in the God my parents worshipped. If He or She were out there, God wasn’t a bigot or a hypocrite. That I was certain of.

Dane caught my eye and raised a brow, clearly asking me if he should serve Shelley another drink. I shook my head and wrapped my arm around her shoulders.

“You’ve had enough. Let me take you home.”

She pulled away and grinned at Dane. “You’re not going to listen to him, are you? He’s way too much of a killjoy. It’s sad really.”

“Are you really going to refuse me?” she asked Dane.

“I think you’d do best to listen to your friend.”

She got a wicked look on her face and I braced myself. Even sober she was good at embarrassing me. “Shelley.” I used my best I’m-warning-you tone.

She leaned over the bar. “If you won’t give me tequila, how about giving me your number?” She dug around in her massive purse and finally produced her phone. “What time is it anyway? Surely you need a break, honey. You wanna take a break with me?”

Dane smiled kindly, but I could see he was going to let her down. “That is a lovely offer, but actually—” He looked at me and winked. “—he’s more my type.”

I sucked in my breath and stared, mouth hanging open. I must have looked like an idiot, but his eyes sparkled with heat. My cock started to harden. What the fuck was going on with me?

Shelley punched my arm. “Why don’t you go for it, then? Might loosen you up.”

I stared at her like she’d grown another head.

She laughed loudly, attracting more attention. “I’d be happy to watch.”
What the fuck? “Shelley, you really need to let me take you home.”

She shook her head. “No way. If the shits in management are going to screw me, at least I can take them for all the free tequila I can get.”

“Don’t ruin your career over a couple of asinine comments.”

Dane nodded. “He’s right. Let him take you home or at least somewhere else. You don’t want to do this at work.”

Her eyes filled with tears. “It’s so fucking unfair.”

Dane patted her arm. “I’m sure it is, but screwing yourself won’t make it any better.”

“You’re positive you don’t want to screw me instead?” she asked.

I couldn’t help being embarrassed for her, but the truth was, she was that blunt sober.

“Sorry, darling, and no, I won’t do him in front of you either.”

I choked on the swallow of soda I’d just taken. “Look, I—”

Dane shook his head. “Get her out of here. We can talk later.”

I helped Shelley get to her feet and kept my arm around her so she wouldn’t fall.

“Tom.” It was Dane calling me. I hadn’t realized he knew my name. I turned around, and he handed me a folded napkin. “Later,” he mouthed.

When I had Shelley tucked into the passenger seat of my car, I pulled the napkin out of my pocket and looked at it as I walked toward the driver’s side. His number was scrawled on it with the message “call me.” Oh my God, he actually did want to go out with me. Okay, more realistically, he probably wanted to sleep with me. But I’m not…

Oh really? So why did your cock get hard when he looked at you?