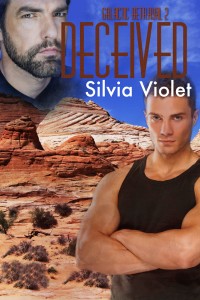 Several months after confessing his love for Lark, his former partner at the Intergalactic Investigations Bureau, Derek Carlson is hired to extract a sniper from the Kraxnafton prison on Lithusia. He hopes the mission will allow him to uncover the identity of the traitor responsible for his own imprisonment.

Lark is certain the mission is a setup, but he won’t let Derek return to Lithusia alone. Derek is his now, and nothing is going to tear them apart–not a sniper out only for herself, not the IIB, not even the Kraxnafton torturers. Derek’s judgment is clouded by dark memories, and Lark must decide whom he can trust. The wrong choice would be fatal for both of them.

Derek sat up in the dark, gulping breaths of the cold, recycled air. He shivered even as he pushed the sheet from his sweaty body.

Lark stirred next to him. “What’s wrong?”

“Nothing,” he snapped. A year. A fucking year since he’d been a captive of the aliens, and he still had nightmares. He hated it.

Lark laid a hand on his leg. “Another nightmare?”

Derek pushed him away and slid his legs from under the covers.Lark prevented him from leaving the bed by wrapping an arm around his waist.

He shook his head.

Knowing Lark wouldn’t let it go, he turned to look at his lover. He did not have the energy for a fight. Not after only a few hours of sleep. “What?”

“Have you thought anymore about talking to someone?”

Derek turned away. “I don’t need a splyvin’ therapist. I need to find the bastard who’s responsible and kill him.”

Lark sighed. “I want to do that too, but I’m not sure that’s going to end your suffering.”

“Then what is? Listening to someone tell me how I have to let go, forgive? Telling me it’s okay to feel weak, like I might fall apart when someone looks at me wrong? That it’s okay to wake up terrified, to know I can be so broken I will do anything—and I mean anything—to make the pain end?”

Tears burned behind Derek’s eyes. He shook his head, willing the images to dissipate. He couldn’t remember everything that had happened while he was a prisoner of the Krax, but he remembered enough. Enough that every time the images flashed in his mind, his stomach knotted. Thank the gods he hadn’t eaten breakfast yet or much dinner last night.

“Do you think that’s okay, Lark? Would you be able to just forgive and forget?”

Lark’s face softened. “Would you at least let me help you forget for a little while?”

Derek almost said no. The only time he could forget was when he was in Lark’s arms, but that upset him too. He shouldn’t need anyone so much. Lark had become his lifeline, and the dependence made him weak. When he’d stumbled upon Lark deep in the jungle on a backwater planet, Derek had been ready to kill him to avenge the wrongs done to him on Lithusia. But Lark had convinced him he wasn’t at fault, convinced him and then broke down the barriers he’d erected between them when they were partners at the IIB.

Derek had never wanted anything like he’d wanted Lark in that thick, muggy jungle. He’d taken him, pinned him down, punished him, and taken him again. Lark had loved it and wanted more. Now Derek couldn’t imagine life without Lark by his side, but he still hated letting Lark take care of him. Loved it and hated it. He longed to toughen up, but despite what Lark thought, he’d always been the weaker one. Lark wouldn’t have broken the way Derek had at the hands of the Krax. Lark typically submitted to Derek in bed, but that was as far as Derek’s dominance went. Outside the bedroom, Lark was often a pushy bastard, and he was always a force to be reckoned with.

Lark sighed. “Lie down and let me help you.”

Derek started to get out of bed. He wasn’t in the mood to be soothed. But Lark sat up and shoved him. He was flat on his back before he registered what happened. Lark stretched Derek’s arms above his head, holding him down. Derek could have broken the hold if he wanted to—at least he could have a few months ago. Lark had been restless as he adjusted to being back in the civilized world, and he’d used up a lot of extra energy at the gym. He might be smaller than Derek, but he was fast and strong.

Lark pressed his body against Derek’s, grinding into him. Derek gasped at the feel of Lark’s cock brushing his own.

He looked up, but the concern in Lark’s eyes unnerved him. Turning his head, Derek exposed his neck. Lark licked his way down the tense muscles of Derek’s throat then buried his face in the crook of his shoulder, breathing deep.

The power of those words made Derek shudder, and his tension eased. Lark really did love him. Derek shouldn’t try to shut him out, especially—his thoughts shut down temporarily as Lark reached between them and took Derek’s dick in his hand—since he loved Lark back.