Father of the Groom 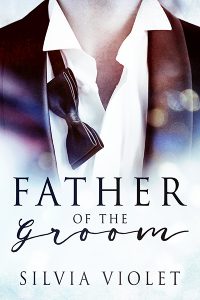 Avery has a good life. He loves his job as a makeup artist, and he’s ecstatic about being Twink of Honor in his best friend’s wedding. He’s more than capable of supporting himself, but that doesn’t stop him from longing for an older man who’ll take care of him.

Graham Hillingdon has finally repaired his relationship with his son, and he’s thrilled to be part of his son’s wedding day, though he wishes he had a plus one to bring with him. Sadly, he has yet to find a man who appreciates both his dominant and nurturing sides; maybe even someone to call him Daddy.

When Avery and Graham meet at the wedding, attraction sizzles between them, and they end up spending an insanely hot night together. Graham makes sure Avery knows exactly who’s in charge in bed, but afterwards, he’s exquisitely gentle. This is just what Avery needs, and Graham is certain he’s finally found a man who desires what he has to give. Neither of them want to part the next day, but between their age difference and their reluctance to reveal their relationship to Graham’s son, they wonder if they have any chance for a future together. But as perfect as they are for each other, shouldn’t it be worth the risk?

I was so hard I worried that just the movement of fabric against my dick would make me come. I leaned down until our lips were almost touching. “I believe you. I think you’re exactly what I’m looking for.”

I kissed Avery before he could respond with words. He wrapped his arms around me, sliding them up my back as our tongues thrust against each other. He tasted so good, I didn’t want to stop, but I heard voices nearby, so I pulled away.

“It is, but”—I took his hand and pressed it against my cock—“I want it anyway.”

He squeezed me and I groaned. I was way too close to the edge. “Enough,” I said, gripping his wrist and pulling him away. “How much longer do you need to stay at the reception?”

He frowned. “Not long, but I’ll need to say goodnight to Felicity and Carter, and a few other people.”

“I’ll stay out here, and give you time. Then I’ll say my own goodnights. I’ll be upstairs in one hour, and I expect you to be in my suite, naked, with your ass lubed and stretched.”

“I do. That is like the hottest thing anyone has ever said to me.”

“I’ll have a lot more than that to say later, boy.” I pulled out my wallet, found a key card, and handed it to him. I was really glad I’d kept both copies with me. “My room number is 344.”

Avery ran his teeth over his lower lip as he took the card. Then he looked up through his absurdly long lashes. “Yes, Daddy. I’ll be waiting.”

“Don’t disappoint me, boy.” He sucked in his breath, proving that my words had the desired effect.

I didn’t doubt that for a second.