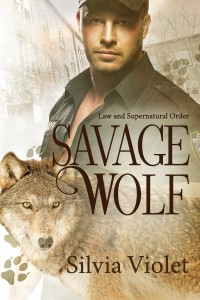 A werewolf and a deer shifter. There’s never been a game of predator and prey quite like this.

I’m Wolf, Officer Aidan “Wolf” Savage. I’m a werewolf. But unlike most of my kind these days, I’m one of the good guys, even if I do scare the hell out of most people the first time they meet me. When a white-tailed deer shifter comes leaping into my life, she makes my body hotter than an erupting volcano. She’s on the run, and she doesn’t want my help. But I’m not about to let her get herself killed, and I’ll use any means necessary to keep her safe.

This novella has been previously published. It has been re-edited and the series name has changed.

I’m Wolf, Officer Aidan “Wolf” Savage. I’m a werewolf. But unlike most of my kind these days, I’m one of the good guys, even if I do scare the hell out of most people the first time they meet me.

I take another sip of coffee before responding to Jacobson’s questions. “We’ve had too many complaints and none from the usual suspects. Something’s up.”

Before I can describe the smell to Jacobson, I hear distant footsteps pounding the pavement. “Someone’s running this way. Someone fast.”

Jacobson nods. I doubt he can hear a thing, but he’s learned to trust my non-human ears without question. A few seconds later, a woman comes into view. She’s wearing a sundress and a pair of high-heeled sandals so I doubt she’s running for her health.

Not that any sane woman would be alone in this part of town at night.
She has straight, reddish brown hair that swings past her waist. Her heavy, round breasts are barely contained by her dress. Shapely legs reach out for the ground, making my cock sit up and say hello. Her strides are so long, she’s practically leaping.