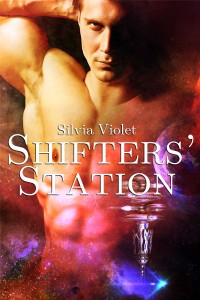 Years ago, the Terran Government betrayed special forces officer Marc Devlin, forcing him to flee for his life. He rescued several fellow officers and built a new life as the head of his own mercenary force. When he captures Kirlos, a beautiful Cerian diplomat, he thinks to torture the man to learn Cerian secrets. Instead of an enemy worthy of his revenge, he finds a lover.

Months later, Marc and Kirlos, who now serves as station commander, take a cargo pilot captive. They fear that this pilot, a young woman named Larissa, might be an agent of one of Marc’s oldest enemies. The two men strike a bargain with Larissa that lands her in their bed for a month. As they dole out exquisite torment with their Cerian sex table, passion builds and turns to love. But the three of them must fight outside enemies and their own instincts to preserve the life they’ve made for themselves.

Buy it from All Romance ebooks »

Larissa ran to the door of her cell when she heard footsteps. Through the bars, she saw two men walking toward her, both wearing uniforms similar to those of the security guards who’d brought her to the holding cell, but with red satin sashes instead of brown.

The man on the left wore a short, red jacket with leather trim and gold braid at the shoulders. She tried to swallow around the lump in her throat. Was he Captain Devlin? If so, she was either about to be freed or sent to her death.

Fear wasn’t the only thing causing her pulse to accelerate as she watched the men approach. Both men were breath-taking. The man in the jacket had dark hair cut severely short and a square face with harsh features. He was tall and broad-shouldered, but he moved with fluid grace. The thick muscles of his thighs strained against his tight uniform pants as he walked. And she couldn’t help but notice the impressive bulge at his crotch.

The other man had long, silky blond hair. A narrow braid circled his head to hold it out of his eyes. The orangey-yellow color of his eyes and his deeply red lips made her think he was Cerian, but she couldn’t fathom what a Cerian would be doing on the station unless he was in the brig with her.

“Step back from the bars,” the dark-haired man said when they were within a few paces of her cell.

His confidence in her obedience made her want to stand her ground, but her good sense overrode that instinct, so she stepped back.

The blond man pressed a button on his wrist unit, and the door to her cell slid open. Both men entered, and the dark-haired man spoke first. “I’m Captain Marcus Devlin. I own this station.”

So she had guessed right.

He gestured toward his companion. “This is my second, Commander Kirlos Adesta.”

Larissa looked at the blond man again. He had to be Cerian. No other race she’d encountered had those prominent cheekbones or startling eyes that reminded her of the swirling colors of fall leaves. What the hell was he doing serving on a station hovering above a planet his people had failed to conquer?

“I’ve already told your security chief that I had no idea the weapons were faulty.”

The captain’s eyes narrowed as he gave her a slow assessment. “I’ve read your testimony.”

The look he gave her sent heat racing to her pussy. She’d heard he was a hard-assed bastard. It would figure he’d be seductive as hell too. “My boss set me up. He’s the one you need to go after.”

The captain raised his brows. “I’m not concerned with who gave you the weapons. Pilots must take responsibility for their own cargo.”

“Company policy does not permit me to examine the cargo. I pilot the ship. That’s all I do.”

The commander cleared his throat, and Larissa noticed he was giving the captain a pointed stare. “Captain, would you like me to scan her for truth telling?”

Devlin tilted his head to the side, giving her a piercing glare. After several long seconds during which Larissa didn’t breathe, he nodded.

She held up her hand as if that could ward him off. “Wait, what does this scan entail?”

The commander cut off whatever Devlin was going to say. “I have the ability to probe your mind to determine if you’re telling the truth. And if you are lying, I can compel the truth from you.”

Larissa had heard about Cerian psychic abilities but had certainly never experienced them firsthand. She studied him for a moment. He seemed sincere and somewhat dismayed by the captain’s brusque manner. “Do it.”

She felt pressure on her head, as if someone were mashing the heel of his hand against her forehead. The pressure turned to pain, growing sharper until it felt like a needle was boring into her skull.

The pain spread as if her skull had cracked. She fell to her knees, panting, and the world began to go black.

Thank the gods. Maybe they would let her go now. Larissa heard the men speaking, but they sounded far away. A dull pounding still echoed in her head. Nothing like the tearing pain of the scan, but she wasn’t sure she could stand.

Then she felt a hand on her arm. Opening her eyes, she saw it was the commander. She wanted to refuse his assistance, but she didn’t want to be on her knees in front of the captain. He was arrogant enough without her prostrating herself like a slave.

Once she got to her feet, she stepped away from Adesta and forced herself to focus on Devlin. His dark eyes were narrow and cold.

“Who taught you to shield your thoughts?”

Devlin raised his brows. “Do you need this ability often on cargo runs?”

“And yours is?” she challenged

Adesta’s lips curled into a wicked smile. “You seem to be losing your touch, Captain. You usually have prisoners trembling in their boots by now.”

“He has established that you were unaware the weapons were faulty. But I still have one dead crewman and several more injured. Someone has to pay.”

“That someone is my bastard of a boss.”

Devlin tilted his head as if considering her words. “But he’s not here, and you are.”

The captain gave her a cold smile. “I’m always serious.”