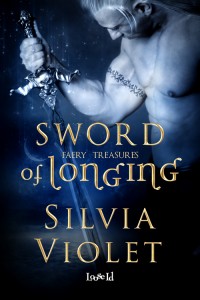 For ten years, Lorna has run from her past. But now her past is catching up with her. When she dreams of a perfectly-formed, blue-skinned man and a magical sword, it's only a matter of time before she'll have to face her heritage -- up close and personal.

Riordan is known throughout Faery for two things: unswerving loyalty to his king and icy self-control. But when his dreams explode with a warm-eyed, lush bodied woman in need, his ice begins to crack.

Then Lorna is attacked by enemies of the faery king, and Riordan comes to her rescue. Though she fears her intense attraction to Riordan, she follows him back to Faery to find the faery sword which is her destiny. Despite her efforts, she soon realizes she can't fight her desire to chip through the ice and unleash the beast beneath. If she finds the sword, and tames the beast, will the wild man claim her very soul?

Lorna stood by the side of a dark, unknown lake. The moon slipped out from behind a cloud and cast its light across the still water. She watched a woman rise and walk on the surface of the water. A tall man with sun-kissed skin and hair so white it glowed stood on the far shore. The woman approached him. He held out a long sword. The woman accepted the weapon and turned to face Lorna.

Lightning flashed, temporarily blinding Lorna. When she could see again, she herself stood on the waters of the lake. A man faced her. His silver hair sparkled in the moonlight. She couldn’t tell if it was a trick of the water reflecting on him, but his skin appeared blue.

He wore no shirt, and never had she seen a man with a more perfectly formed chest. Celtic tattoos circled his arms, and a radiant sun surrounded his navel. Her heart hammered. She sucked in her breath as hot waves of lust threatened to consume her.

He unsheathed a sword, gripping its hilt in both hands and held it out to her, point first. She stepped back, frightened for a moment. Then lightning flashed again.

The same man stood before her, but now he was naked. His clothes and the sword had disappeared with the flash. His cock thrust upward as the sword had. Her knees buckled when she realized it was nearly as large as the massive weapon.

Lorna sat up with a start, pushing the sweat-dampened sheets off her. She shook her head to clear it.

That damned dream again. She’d been having it for over a week, necessitating she start every day with a cold shower. Now this morning would be no exception.

She slid from bed and stumbled through her dark bedroom into the short, narrow hall. Only the barest indication of dawn shone through the gap in her heavy curtains. Once again, the gorgeous man with the blue skin and enormous … sword had wakened her hours before she needed to be up.

Waiting until the last possible moment to confront her tired eyes with light, she entered her bathroom and fumbled for the faucet. After splashing cold water on her face, she braced herself and flipped the light switch. She wished she could shower in the dark, but she decided that was an accident waiting to happen.

Cool water splashed over her body, but it did nothing to halt the hot pulsing between her legs. Lorna knew from experience that she would spend the entire day in a state of heightened arousal. At least now that she’d hired a few more employees to help out at the shop, she’d be able to go out that night. She wanted to concentrate on developing her business, not a relationship, but she enjoyed sex as much as any girl. And it had been far too long since she’d gotten any. If she could take off early from the shop, she could catch a nap, then head out to her favorite club. Hopefully, she’d find a man who could help her get some relief.