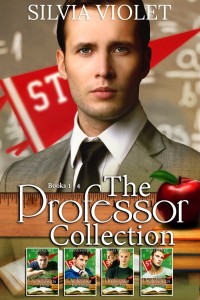 When Jason finds a very interesting toy in Dr. Michaels office, he decides to give the professor a demonstration. If he’s lucky, his efforts will lead to testing the sturdiness of Dr. Michaels’s desk.

When Dr. Lucas Caldwell works up the nerve to visit a high-end sex club, he discovers that Gavin, the student he’s fantasized about for the last year, works there. Gavin offers to be his companion for the evening, and Lucas can’t make himself say no to his favorite dirty fantasy.

Releases November 9. Links will be added as they become available.

From The Professor’s Desk:

From his position in the departmental office, Jason had a perfect view of Dr. Michaels, the English department chair. The tall, slim redheaded man was seated at the desk in his private office, clicking away on his keyboard. He’d sunk his teeth into his lower lip, a sure sign he was concentrating on whatever he was working on. No sign he’d be leaving soon. That meant there was no chance Jason would be leaving either. He’d been waiting to find himself alone with this man ever since he’d been assigned to the department as a work-study student.

Finally, Jason’s chance had come. It was Friday at—he checked his watch—six PM. He doubted there was anyone else in the building with the exception of a few ancient professors he was convinced lived in their offices. They also rarely left them.

But workaholic or not, the man was fucking gorgeous, and Jason had good reason to believe he was gay. If the way he stared at Jason when he thought Jason was unaware wasn’t evidence enough, he’d seen Dr. Michaels staring at one of his graduate student’s ass, which showed the professor had good taste. Rob had a damn fine ass and he knew how to wear the right pants to show it off. But what had sealed it for Jason was the butt plug he’d found in Dr. Michaels’s filing cabinet. It was still in its plastic packaging, as if the man hadn’t gotten up the nerve to use it, which wasn’t surprising considering its hefty size. Jason wasn’t afraid of it, though. He loved a thick cock up his ass. He wondered how large Dr. Michaels’s cock was. If things went as planned, he’d be finding out that night.