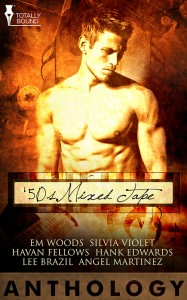 This anthology includes my story, Rush Around the Clock.

Patient soul Finn McMurphy teaches music and drama to middle schoolers. By the time he’s finished with after-school rehearsals and the private lessons he teaches to make ends meet, he’s too exhausted to think about dating or even hanging out with friends. He’s resigned to life with his music, his students and his ludicrously spoiled Yorkies.

Then he meets Crawford Bixby. Crawford may be the most perfect man Finn has ever met—kind, good with kids, gorgeous and completely unconcerned with Finn’s lack of ability to be coherent around him. Finn falls hard for him, but he’s terrified of what he feels. Will he be able to step out of the controlled world he’s created for himself and take a chance on love, or will he keep making excuses—rehearsals, papers to grade, dogs to walk—and push Crawford away?

Buy it from Totally Bound »

The stranger extended his hand, probably thinking Yip and Yap were going to make friends with him, poor hapless soul. They only made friends after barking at someone for several hours and holding out until they’d received a succession of bribes, typically ending with the penultimate weapon in doggy seduction, bacon.

Yip and Yap leapt at the man, bouncing almost up to his waist and snapping at him. Rather than looking annoyed, the man just laughed at them.

The dogs ignored him as usual. He wished he had their leash. He’d never be able to hold both of them when they were squirming to get loose.

Both dogs turned and ran to him.

He didn’t actually have cookies, which the dogs were crazy for, but he did have a few of their favourite treats in his pocket. He held out his hand and they gobbled up the little chicken-flavoured bits. He scooped up Yap, but Yip raced back to the sinfully gorgeous man who was now studying Finn with an intensity that made him shiver. Why hadn’t the man high-tailed it out of there the second the little monsters were off him? Finn probably would have.