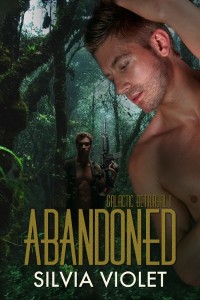 Lark Zaccaro and Derek Carlson were partners and friends. Lark wanted more. Then someone at the Intergalactic Investigations Bureau sold them out to enemy aliens. Lark was forced to abandon Derek to the enemy, and Derek bought the IIB’s story that Lark betrayed them all.

When Lark’s deep cover mission and Derek’s new job in search-and-rescue collide, the desire simmering between them explodes. Lark needs Derek’s help to escape a new enemy, and Derek needs to discover the truth about what really happened on that alien planet. Can they overcome lies and betrayal and find the love and comfort they seek, or will their past forever keep them apart?

Lark Zaccaro smiled as he stepped out of the dripping jungle heat and into the prison building. Even inside, the stale air was so splyvin’ hot it belonged in an oven. He didn’t know how anyone could breathe, not that he was supposed to give a fuck if his prisoners got air or not. He took as deep a breath as he could and headed straight for the interrogation room.

A few hours earlier, his guards had discovered a man crouched in the underbrush, spying on their enclave. Lark’s morning had been hell so far, and a vicious interrogation suited his mood perfectly. The two guards flanking the door stepped aside, so he could enter what was truly more of a torture chamber than an interrogation room. At least that’s what it had been for his predecessor, and the longer Lark lived on Lancarina, the more he found himself becoming like the man he’d assassinated and replaced. He pushed that disturbing thought away. He wouldn’t dwell on how low he’d sunk since he’d left his partner to die in a Lithusian prison cell.

The captive hung from the ceiling, suspended by a heavy chain circling his bound wrists. His toes barely scraped the floor, forcing his arms to support the weight of his large body. The dirty chain bit into his wrists, and blood dripped down his arms. In this squalid jungle, he’d have a deadly infection in no time. Lark would have to do something about that. The man had a ship with advanced defenses. Thus, he was Lark’s ticket off this cesspool of a planet.

The man’s clothes hung in shreds, and Lark couldn’t help but admire his muscular body. His gaze slid over the captive’s hard thighs, the impressive bulge in his pants, and the well-defined and disturbingly familiar planes of his chest. When he saw the man’s face, he froze. No. It couldn’t be. His former partner would have no reason to be here. But Derek Carlson, the man who had haunted Lark’s nightmares and his fantasies every day for the six Old Earth months he been in this hellhole, was right in front of him. Chained. Suspended. His to do with as he pleased.

Lark’s cock hardened, pressing against the confines of his pants. His body knew what it wanted from Derek, but his mind was less sure. Retribution? Forgiveness? A hot fuck before he threw him in prison to rot? Salvation? His gut knotted at that thought, and he fought to keep his guards from noticing how off-kilter he was. He had to play his role, not rush this moment.

There would be time later, in his private quarters, to decide what he wanted to know and how he was going to get the information. If the vessel they had captured in the jungle was Derek’s private-issue ship, then he’d finally forsaken the lying scum at the Intergalactic Investigation Bureau. Those bastards say their mission is to protect everyone in the five galaxies, but they only care about protecting their own asses. Lark intended to find out why Derek had left, but his guards would play no part in that interrogation. Derek was his.

Lark took a few steps toward the prisoner and studied him. He’d wanted him for years, from the moment they were assigned to work with each other at the IIB. Derek had turned down all his advances, saying they should keep their relationship professional. But now Derek was his prisoner, not his partner. If he wanted to live, he’d do whatever Lark told him to.

From the way Derek hung limply in his bonds, he was either unconscious or doing an excellent job of faking it. His former partner had fought hard from the look of him. A livid bruise stood out on one cheek and purple splotches decorated his ribs. A deep gash on his arm had dripped blood trails that were now dry. He would have to tend to Derek’s wounds.

Lark needed the man’s piloting skills. If he were going to kill Derek for believing those liars from the IIB when they told him Lark had turned traitor, he intended to do so with his own hands—after they got off planet. Fortunately, he kept a fully stocked first aid cabinet in his quarters. He just needed to find a way to get Derek there without making his men suspicious.