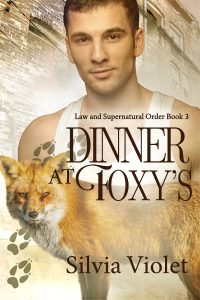 I’m Silas Bixby, and I’m a proud member of the Atlanta Police Department. Ever since I was a little kid, I wanted to be a cop. My grandad was on the force, and I admired him more than anyone else in my life. Some days I still miss him so much it hurts. He was killed in the line of duty when I was ten, which meant my mom wanted me to do anything but put myself in danger, especially after the shifters and vampires came out.

I tried to fulfill her expectations, to love God, revile the non-humans, and go to law school to fight for human (that would be human only, not shifter or vampire) rights. I failed. I met some shifters and realized they weren’t the monsters I’d been taught they were. I quit law school, graduated from the police academy several months later, and I’ve been living my dream for the last two years. My mom gave me frequent lectures for months, but she’s finally accepted it.

Every day on the job is different. Some are full on insanely fucked-up. Some are dull. Others are frustrating as hell. This is one of the slow ones, so I stop for lunch at Foxy’s Chicken Shack, a place Wolf and Jason recommended. Wolf’s one of the experienced cops at my precinct, and he is, in fact, a werewolf. Jason’s a deer shifter and one of the best techs in the crime lab. The two of them say Foxy’s has the best chicken in town, and if there’s one thing I’m sure they know, it’s good food.

Based on Jason’s rather lascivious description, the man standing at the counter taking orders is Foxy himself, otherwise known as Luke. He’s every bit as hot as Jason promised. Did I mention I like men? I’m a gay, shifter-loving cop, soooo not what my mama wanted. She still talks to me, though; at least there’s that.

Luke gives me a blatant once-over, one that makes my cock twitch in anticipation. Jason warned me Luke’s an outrageous flirt; he’s also a big, barrel-chested man with red hair and arms I want to run my tongue over. He oozes dominance and wicked know-how, which pushes just about every button I have. I hold back a sigh as I indulge in a bit of staring myself.

“What can I do for you?” Luke asks in a low voice with an accent that marks him as Georgia born and bred.

Oh, the things I’d like him to do to me. If only I had the nerve to tell him. I glance at the menu posted above his head.

“Um…I’d like…” I almost blurt out chicken as if that tells him anything.

“White meat or dark?” he asks, still using that sexy drawl that is fucking with my ability to think.

“Legs.” The word comes out too loud, and heat fills my face. I must look like a fucking idiot. “The…um…leg plate. With slaw and fries.”

“What level of spice?” he asks and points to a chart next to him.

“Um…” I choose from the middle range of the list. “I’ll try the Eff You Up sauce.” Does it really have to be named that?

Luke grins. “You got it.” The implication that I could have a lot more than food if I were interested hangs between us. But I’m not. Interested, that is. Well, I am. But, you see, I’m cursed. Other men have no problem with casual sex, but I want a relationship. That shouldn’t be so hard, right? Problem is I want a relationship with someone who isn’t an asshole or a cheater or who thinks my wanting to be dominated in bed means I like to be ordered around when we aren’t fucking.

Then there’s the fact that I’m a cop, not something Luke could’ve missed since I’m in uniform. While he’s never been arrested, rumor has it he’s not averse to supplementing Foxy’s income through illegal gambling or brokering deals for petty criminals. His cousins run a crime ring specializing in weapons and stolen cars. They’re everything humans fear about shifters—strong, powerful, and utterly unconcerned with anyone’s welfare but their own.