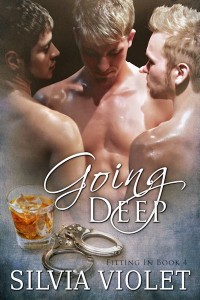 Gray, Jack, and Mason are back. Their threeway relationship keeps growing stronger, and Gray 's feelings for his partners run deeper than he ever thought possible. While he’s learned to be romantic at home, at work, he’s still a big tough cop that nobody wants to cross. When the murders of several young prostitutes falls to him to solve, and he has no suspects and no motive, his confidence takes a hit. Every dead end, every day that goes by, adds to the urgency he feels to find the murderer.

Gray desperately needs a break, with the case and for himself. He excels at taking care of both his men, in bed and out, but when it comes to accepting comfort in return, he shuts down, even with everything at work going to hell. Jack and Mason want him to take a vacation when the case ends, but Gray knows he sucks at down time unless it’s spent in bed.

With his case weighing on him and his partners trying their best to help, Gray is going to have to figure out how a high-handed man like himself can let go.

Purchase is multiple formats at Payhip

Gray rolled his shoulders, trying to release some tension. He’d had a hell of a last few months on the job. After arresting a piece-of-shit drug dealer, he’d spent weeks defending himself from the fucker’s accusations of police brutality—yes, Gray had manhandled him, but that was because he tried to fucking stab Gray after swearing that all he wanted to do was talk. Finally Gray had been cleared of all wrongdoing. And yesterday, the man, Mitchell Benson, was convicted and given twenty years in prison, the strictest allowable sentence for his crimes.

While Benson’s shenanigans functioned as a backdrop, Gray had tried to work himself out from under a heavy caseload. He’d spent the last several days chasing down dead ends in an investigation into a young—as in underage—prostitute’s murder. So far, no one he’d talked to would even admit to knowing her, and they sure as fuck hadn’t given him any information that might lead to a conviction. Every time he thought about the girl, he remembered Nancy, a young girl he’d failed to help a long time ago. Sometimes being a cop was fucking depressing.

“Gray, it’s time. Let’s go.” Lieutenant Thornton appeared by his desk. Gray had been so mired in frustration he hadn’t even noticed the lieutenant.

He sighed and closed the file he’d been looking at. As if the week hadn’t been bad enough, now he had to attend a press conference. His captain, with the sadistically gleeful approval of Thornton, had decided Gray should be the new face of Durham PD. Gray wanted to tell Captain Russell to go fuck herself, but sadly, that was out of the question.

“I’ve got to go to the restroom first,” Gray said as he removed his suit jacket from the back of his chair.

His lieutenant wagged a finger at him. “No escaping out the window. I’ll make sure someone’s watching.”

Gray wanted to wipe the smirk off Thornton’s face. Of course, if Gray thought running away would work, he just might try it, not that he could fit through the tiny men’s room window.

After Gray finished at the urinal, he glanced at himself in the mirror and straightened his tie. His boyfriends, Jack and Mason, had helped him pick out the suit he was wearing, the nicest one he’d ever owned. He’d grumped his way through the shopping trip, but he had to admit he looked good—strong, confident, exactly the image the captain wanted him to show.

Their chief, in cahoots with the mayor’s office, had gotten the idea that the police force should be proactive about PR to combat all the bad press about cops recently.
Gray had no desire to be put in the spotlight, even if they needed to give the community something positive to focus on. No matter what Captain Russell thought, Gray wasn’t sure a big gay bear was what people wanted to see in a cop. But after the captain had given him a well-prepped speech on the police force embracing all people—his gay ass included—she’d requested that Gray participate in what was to become a weekly briefing with several specially chosen local reporters. Obviously, the “request” was simply an order phrased more nicely than usual.

Thornton banged on the door. “Gray, quit primping and get your ass out here.”
Hopefully he wouldn’t disappoint his superiors. No matter how much he hated being made a poster boy for good cops, he was willing to suffer if it would help with the department’s image.

He took a final breath and walked through the door. Thornton led him to a classroom that had been turned into a “briefing” room. Several cameramen were setting up, and four perfectly coiffed reporters were waiting for him at the front of the room.
Their captain caught up to them as they were about to enter.

“Time to go in?” Thornton asked.

She nodded and looked at Gray. “Sit at the back until it’s your turn and don’t draw attention to yourself.”

Right. At six four with a linebacker’s build, Gray drew attention to himself wherever he went. It doesn’t hurt that you are also hot as fuck. He heard Jack’s words in his head and fought the urge to grin. “Yes, ma’am.”

The chief spoke and Gray tried to focus on his words, but the voice in Gray’s head saying don’t screw this up drowned out everything else.