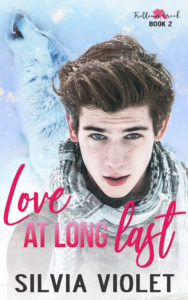 I could smell an unfamiliar omega, but I also smelled a human whose scent was intoxicating, causing me to react like I would to an omega in heat. The human was afraid, and his fear called my wolf to him.

I kept my snout to the ground as I followed the scent. It grew stronger as I neared the cave where my pack sometimes gathered when in wolf form.

What was an unknown human doing in my cave? I should be searching for the omega who was most likely a runaway from another pack, but the call of the human’s scent was too strong to resist. I reached the entrance to the cave. It was narrow, but a large chamber opened up just inside. It had served as a place for wolf shifters to hide from humans long ago, back when they all lived in secret.

When I stepped into the cave, the human’s scent hit me so strongly, the world began to spin. There was something odd about the smell beyond its power over me. It was human and yet… not. The man must be a human-wolf hybrid. He also had to be close by.

I shifted back to human form. Likely he would be scared to meet me in either form, but human was slightly less intimidating. I shivered in the cold, early March air, already missing my fur.

I pulled on a pair of sweatpants from the stash my pack kept in the cave in case anyone needed to resume human form while out in the woods. They were too tight, but they made me decent enough.

As I moved further into the cave, the enticing scent grew stronger. My cock hardened, and my wolf urged me on. Want. Need. I was glad I was in human form where I had better control over my wolf’s primitive urges. Still, I longed to find this tempting man, shove him up against the cave wall, and bury myself inside him. I shook my head, trying to clear it of such thoughts. I felt as if a fog had descended on my brain, making rational thought almost impossible. What was wrong with me? I’d never felt such a strong urge to claim, not even when I’d been with an omega in heat.

I moved further into the cave, down one of the branching tunnels. That’s where I saw him, a lean man wearing a police uniform. He was turned away from me, and his pants hugged his very round ass. Stop staring.

“What are you doing here?”

The man jumped and turned to face me. He was young, no more than twenty-two or twenty-three, and he was beautiful. His dark, wavy hair contrasted with his pale skin. Freckles dotted the bridge of his nose, and his eyes were startlingly blue and so expressive. My wolf liked the fear emanating from him more than it should.

“I’m searching for a missing boy.”

“This is my land. Do you have a warrant?”

There was no point in denying it. “Yes. Now tell me why you’re here.”

“There’s a boy who’s missing. A runaway. He’s been seen in this area, but I didn’t realize… I thought—”

I held up a hand and took a step toward him. His beautiful eyes widened, and I wanted to cup his face and kiss him. I was sure he would taste so sweet.

He backed up until he hit the wall. “Please, sir. Don’t eat me.”

I wanted to eat him, but not the way he thought. “I don’t know what you’ve heard about shifters, but we don’t eat people. I won’t hurt you, boy. I just…” want to seduce you, strip you right here, and fuck you in this cave, “want to know more about this missing boy. Who told you he might be here?”

He was shaking, and the scent of fear was overpowering everything else. As much as my wolf might enjoy the smell, I didn’t like upsetting the boy, but I needed answers.

“Tell me, boy.” I added a slight growl to my words, and he pressed himself harder to the wall, but his scent changed slightly, desire mixing with fear. That was interesting. Very interesting.