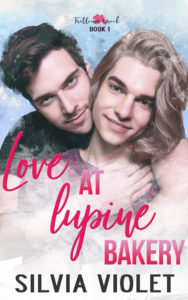 Finn is focused on continuing the success of his family's bakery. Eventually, he'll settle down with an alpha and start a family, but for now, he's content to satisfy his needs with casual hook-ups. Then a gorgeous stranger walks into the bakery, and Finn's whole world shifts.

Levi's father was a wolf shifter, but he was raised by his human mother and—like most hybrids—has never shown any wolf characteristics. That all changes when he enters Lupine Bakery and every instinct tells him the omega behind the counter is his.

The bakery door jingled as a gust of cool autumn wind rushed in, bringing with it the most amazing scent I’d ever smelled. Earthy, with cinnamon, clove, and something that screamed pure sex. At first I thought alpha wolf. Then I thought human, though no human had ever smelled that strong or alluring. My cock swelled as I drew in a deeper breath, making me thankful for the apron I was wearing.

Mrs. Adams had been coming to the bakery regularly ever since my parents opened it. After they passed away and I took over, she remained one of my most loyal customers. Today she was picking up a cake decorated with fall leaves and pumpkins for her bridge club as well as an assortment of her husband’s favorite Danishes.

She handed me her card, and I ran it and gave it back along with her receipt. “I hope you and the other ladies enjoy the cake.”

“Oh I’m sure we will, dear. Everything you make is always perfect.”

“Do you need any help getting to your car?”

“No, I’ve got it.” She set the bag with the Danishes on top of the cake box and picked them up. “You have a good day.”

After she turned to go, I finally allowed myself to look at the man whose scent was driving me insane and making my jeans very uncomfortable.

He was taller than me, but then most men were. His hair was dark and wavy, and his brown eyes were flecked with gold. I’d been confident he’d never come in the bakery before because I could never forget a scent like that, but after I saw him, I didn’t have a single doubt. I would’ve done everything in my considerable power to seduce a man who looked like he did.

I might be an omega, but I wasn’t one to sit around and wait for a man to proposition me. I knew what I wanted, and I went after it as often as I could. Since I’d taken over running the bakery, I didn’t have a lot of time for going out. Having to be at work at three AM made going out to clubs next to impossible.

The stranger smiled, which only made him hotter. He had dimples—fucking dimples—and boyish charm—more of it than anyone should have the right to. I doubted he was younger than my twenty-two years, but he couldn’t be much older. Interest sparked in his eyes when I met his gaze. If the goddess favored me at all, he would be the one to end my dry spell.

“Can I help you?” I asked, my voice coming out huskier than I meant it to.

Mr. Smells Like Heaven took his time examining the treats in the cases. I wished he’d examine me the same way.

“What do you recommend? I’ve only lived in Emsworth for a few weeks, and I’ve never been in here.”

“I thought you were new.”

I nodded. “I would’ve remembered you.”

“Oh.” He looked down at the baked goods case again. “I guess that’s good.”

“It’s very good.” I assured him, hoping my smile didn’t look too predatory.

I loved that he was both shy and hot. Something told me he wouldn’t be shy in bed, though. No one who smelled so strongly of alpha would be, though his scent still confused me. Was he human or a wolf? He must be a hybrid, but they rarely smelled so wolfish.

“Tell me what you like, and I’ll help you decide. Something rich and chocolaty? Something tart?” I lowered my voice. “Or something filled with cream?”

His eyes widened, and he sputtered a bit. Had I gone too far? Did I care?

“It always does to me.” My wolf added a bit of a growl at the end.