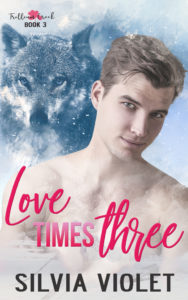 If you love something let it go...

A few days later, after packing up some lunch leftovers for Cam, I slipped out the side door of the farmhouse, hoping no one would notice me. I wasn’t so lucky. Ryder stood there on the wraparound porch as if he’d been waiting for me.

“Taking a snack with you?” he asked, glancing at the insulated lunch bag in my hand.

He knew I was helping someone else who’d left the Oaklawn Pack. I was sure of it. When Rory had run away, Hanson, the Oaklawn Pack alpha, had accused Alpha Silas of kidnapping him, and we’d had a confrontation with the police. Something good had come from it, at least. Alpha Silas had met his fated mate, a young police officer named Cory.

As far as I knew, no one in our pack had assisted Rory directly, but several of us had helped others leave Oaklawn, though all the other refugees had been over eighteen. That didn’t mean I wanted to discuss my business with Ryder. “I’m repairing some equipment this afternoon and figured I might get hungry.”

His raised brow told me he didn’t believe me.

“Why do you care?” Fuck. Why was I trying to rile him up?

“I always care about what you’re doing, Brett. I want to keep you safe.”

I ignored how my stupid heart sped up at that. I wanted to move closer to him, to touch him, to kiss him. “I’ll be safe enough. I suppose I could pinch a finger or bang myself up a bit working on the tractor, but I promise the snack won’t contribute to that.”

For a second, he looked hurt, but a scowl quickly replaced the vulnerable expression.

“Is there something else you need to say?” I asked.

I blew out a long breath. Did he have to look so fucking gorgeous leaning against the railing? I could practically feel the alpha energy rolling off him, his wolf watching me from behind those dark eyes. Why did I have to miss this man so badly—the taste of him, the feel of his warm breath against my skin, the comfort of his arms, the way I could just surrender and let him take control? If I stayed there much longer, my cock was going to betray me.