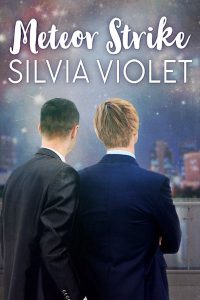 Astro-physicist Matthew Dansk falls for one of his colleagues during a research trip, but Alan won’t tell anyone he’s gay and he never goes out with the same man twice. Matt is looking for a serious relationship and he doesn’t date men who are in the closet. When the two men part ways, Matt does his best to forget his feelings for Alan.

Months later, Alan winds up in the hotel room next to Matt’s at a conference, and both men realize the chemistry between them hasn’t diminished. As they spend time together, Matt sees a different side of Alan. When he realizes Alan’s feelings for him run deeper than he’d thought possible, he begins to hope that they can be together after all.

I wrestled with the key card, but I finally got the little light to turn green, and I entered the space I had to myself for the entire week. Every time I’d been to a conference since I started grad school, I’d had to share with other students. My advisor at Berkeley never had the funds to get us our own rooms, and I couldn’t afford to pay the extra myself. But now, as a postdoc living in a town with a much lower cost of living than Berkeley, I could afford some privacy.

It would be pure bliss. No colleagues coming in drunk and getting sick on my shoes. No walking in to find two of my roommates going at it like rabbits.

While I couldn’t control how loud the people in adjacent rooms would be, at least I’d have somewhere to hide if I got overwhelmed like I usually did in crowds. I set my luggage down and put my conference badge around my neck. Then I double-checked that I’d put my key card in my wallet and set out to find something to eat before my stomach started eating itself.

When I stepped into the hall, I froze. Alan, the postdoc from Arizona State, was standing in front of the room next door. He’d starred in my sexual fantasies for months. I’d wanted him so badly when I lived in Arizona that I would’ve made a deal with the devil to get him, except for one important detail—he was so deep in the closet he was on an expedition in Narnia. I’d dated a closeted man my first year at Berkeley. Despite the liberal climate, he couldn’t bring himself to “disappoint” his Catholic family. I’d put up with never going out anywhere close to the university and acting like I didn’t even know him when we were on campus, but when he’d told his sister I was no one important after confessing he loved me in bed the night before, I’d broken things off.

I understood why many gay men felt the need to hide, but my boyfriend’s denial of me had hurt more than I’d thought it could. I needed a partner who was willing to be seen with me somewhere other than the dark corner of a bar two towns away. That was one rule I wouldn’t budge on.

Now Alan was here, and seeing him brought all the feelings I’d had for him rushing back. I watched him, unmoving, hoping he wouldn’t notice me. But after he checked his door to make sure it was locked, he turned my way, and his eyes widened.

“Yeah.” I stood there, staring stupidly. If anything, Alan had gotten more gorgeous since I’d last seen him nearly a year ago.

“How have you been?” he asked.

“Um…” How had I been? Grumpy, overworked. Longing for someone like him, but not too much like him, just a man as gorgeous and charming who made my heart beat like I’d run a marathon but who knew what he wanted and went after it. “Good. I finished my degree in December, and I’m at LSU now. I’m a postdoc for Greg MacIntyre.”

“I’d heard. Congratulations. That was quite a sought-after spot.”

Heat filled my cheeks. I was proud of winning the position, but I wasn’t good at accepting praise. “I’m happy to be there.”

“Are you still at Arizona?” I asked. I knew he was, but I needed an easy question.

“I am, but my postdoc ends in August, so I’m considering my options.”

I nodded, not at all sure what to say now. I knew there were plenty of socially useful questions you asked people when you hadn’t seen them in a while, things to keep the conversation going. But I couldn’t think of a single one.

“Have you had lunch yet?” Alan asked.

I shook my head. “No. I was headed downstairs to check out the restaurants.”

“Would you mind some company?”

How the fuck was I going to eat if he was with me? My stomach had been doing backflips since I’d seen him. “Of course not.”

“Great.” He laid a hand on my back and ushered me toward the elevators. It was a completely platonic gesture, one any straight friend might have made, but the heat of his skin burned like he was branding me. I was in so much trouble.

Alan wanted to try the Italian restaurant across the street from our hotel, and I had no reason to argue. The hostess seated us at a corner table. Even though the sun shone outside, the inside of the restaurant was dim. The table wore the quintessential red-checkered tablecloth, and a candle floated in a glass bowl in the center. The setting felt all too much like a date.

Alan grabbed the wine list as soon as the hostess set it down. He perused it while I watched the traffic whiz by outside and wondered how I was going to get through this lunch without embarrassing myself. I kept glancing at Alan. He’d let his hair grow longer since we’d parted ways, and the slightly shaggy, unkempt look was good for him. His cheeks were still plump and adorable. They gave him enough of a boyish look to soften the blow when he cut you down to size in his role as hard-assed king of the lab. And his lips. Full. Soft. I remembered how they felt against mine far too clearly.