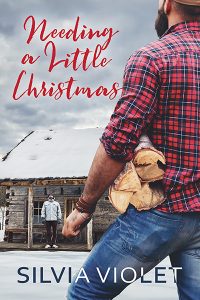 Discovering his boyfriend's affair with a co-worker wrecks Eli's holiday plans. With his parents on a cruise and his brother and sister out of town, he's on his own. His mother insists he escape to her friend's mountain cabin. Eli reluctantly agrees, but he takes off unprepared and ends up driving into the worst snowstorm the area has seen in years.

He survives the trip, but he's stuck with no logs for the woodstove and little food. Fortunately, he gets the number for Mac's Wood Delivery. Mac doesn't mind riding to the rescue, and his deep, sultry voice has Eli eagerly anticipating the delivery. Is Mac the little bit of Christmas cheer Eli has been needing?

“What do mean you’re not going to be with Dave’s family for Christmas? Why?”

I pulled the phone away from my ear. I’d known my mother would be upset, but her reaction was even more vehement than I expected.

“Apparently one of the junior partners at his firm isn’t nearly as boring as I am. They’ve been having an affair for months.”

My mother made a sound of disgust. “Oh, honey, I’m so sorry, and you are not boring.”

“I know, but Dave thinks I am.” And honestly, I thought he was probably right. I preferred to stay at home rather than go out. I spent most days in sweats and T-shirts. When Dave did drag me to a party with his socialite friends, I inevitably embarrassed him with my lack of knowledge of current affairs. I’d taken to hiding out in the bathroom writing notes for my next book on my phone. He’d even attempted to coach me in the art of party conversation. I’d used his lessons in a book but ignored them as they applied to me. The book had done well; readers found his suggestions hilarious.

When Dave told me I was not only an uninteresting social companion but boring in bed as well, I’d taken that seriously. I might prefer a quiet lifestyle, but I knew how to please a partner sexually. After pondering what I could do to shock him, I’d gotten my nipples pierced, something I’d secretly wanted to do for years.

I should have broken up with him that night. We’d only had sex a few times after that, and each time, Dave raced to completion, showered off the scent of me, and promptly fell asleep.

I heard my mother’s heels click against the floor, the sound reminding me to concentrate on the conversation. She must be pacing, something she always did when strategizing. “I’m so sorry, honey. Do you want us to cancel our cruise?”

That was the last thing I wanted. “Of course not. You’ve been looking forward to it for months. I’m fine. Really.”

I held the phone between my shoulder and ear as I poured myself a generous measure of whiskey. “Yeah, things hadn’t been great between me and Dave for a long time.”

She huffed. “That doesn’t give him any excuse to—”

I held up my hand even though she couldn’t see me. “No it doesn’t. He acted like an ass, and I think he knows it. He moved out of his beloved apartment and told me I could keep it.” Not that I could afford it for long unless my next book was a runaway hit.

After draining my drink, I’d wandered into my bedroom and caught a glimpse of myself in the mirror. My eyes were red from lack of sleep, and they looked more hazel than their usual bright green. My curly dark hair stood out at odd angles. The stress of trying to meet the deadline for my book and trying to hold on to a relationship that had died long before I caught Dave fucking his colleague in his office hadn’t been good for my appetite. I’d lost weight, and the bones in my face showed prominently. I was definitely not looking my best, but

I wanted a few more days to wallow in self-pity.

“I really don’t want to be around anyone right now.”

My mom sighed. “But it’s Christmas.”

I ran my hand through my hair, making it stick out even more. “I’m not in the mood for holiday cheer.”

“Your dad and I can go on a cruise another year.”

“No, arranging this once was difficult enough. Rick and Cindy will want to spend next year with you since they’re with Cindy’s family this year. And Ally’s trip to California is a special one-time deal. This is our gift to you, and I won’t be responsible for screwing it up.”

“You wouldn’t be responsible, Dave would be.”

“I wasn’t exactly looking forward to listening to his family brag about how wonderful they all are. I’ll have a better time alone.” My mom’s pacing stopped, and I realized I’d said the wrong thing.

“Eli, why didn’t you tell us you didn’t want to go home with Dave? We would never have agreed to the cruise if we thought you’d be miserable at Christmas.”

I tried to backpedal. “It would have been fine. I enjoy visiting Boston, even if the company leaves something to be desired.”

“Hmm.” My mom didn’t sound convinced. “Maybe we could get you a ticket for the cruise. It might not be full.”

The cruise was supposed to give my parents some uninterrupted time together. And the last thing I wanted was be trapped on a ship with lots of happy, smiling people encouraging me to socialize while my mom fussed over me. “No, thanks. I really, truly would rather be on my own.”

“Stay home and drown my sorrows in Christmas cookies and eggnog.”