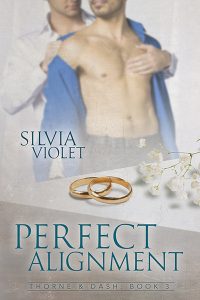 The maître d’ at Bavaria Haus recognized Thorne immediately. “I have your table ready, sir, and your server will bring out the wine you requested right away.”
Bavaria Haus didn’t take reservations unless you were Thornwell Fucking Shipton, and Riley noticed the dirty looks they received from several patrons who were waiting in the crowded lobby. One grumbled about entitled pricks loudly enough for Riley to hear, but if Thorne noticed, he didn’t seem to care. He’d likely heard worse complaints about his behavior that very day at the office.

Thorne relaxed under his attention. Of course he had, but he’d probably thought Riley would bristle at that. He used to, but now he knew it meant Thorne was trying to please him. If he really wanted something else, he could always speak up.
Thorne ordered kartoffelpuffer and beef rouladen, the same appetizer and entrée they’d first eaten here, despite the kartoffelpuffer not being on the current menu. He really was up to something.