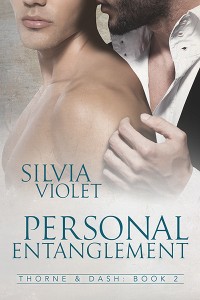 Now in Audio at Audible and Amazon.

Available in multiple formats at Payhip

Thorne pinned Riley’s wrists to the bed. “You like this? Like me turning things around and taking your ass?”

“Yes!” Riley struggled to get free. He tried to move his hips, to take Thorne deeper, but Thorne held himself still, cock barely inside Riley.
Thorne knew holding back was driving Riley insane.

“Why are you doing this?” Riley whined.

Thorne bit his lip, concentrating on not fucking Riley. He’d told himself he wasn’t going to push for more now that Riley was his… What? Boyfriend? Partner? Lover? He’d tried to be good, tried not to beg Riley to move in. He’d meant to wait and let Riley realize how good it would be for them to be together every night, but Riley wasn’t deciding fast enough to suit Thorne. And Thorne liked getting his way.

Just before they’d tumbled into bed, still half-covered in whipped icing, which should have been on a strawberry cake, Riley had said he needed to go home. He had an early morning, and it was easier to catch the train from his place.

Thorne had used his best weapon to keep Riley there: seduction.

“Thorrrrne.” The word was half exasperation, half raw lust.

“Say you’ll move in with me.” Thorne’s attempt at manipulation was so blatant, so ridiculous, there was no way Riley would say yes. Of course, Thorne would fuck him anyway, as if he could deny himself such pleasure.

He sank in a little farther, and Riley groaned.

“What happened to not forcing this?”

Thorne shrugged and smiled at him. “I got impatient.”

Riley looked up at him. Soft, hungry, like he fucking worshipped Thorne. Then he flipped them, straddling Thorne and driving himself down, taking all of Thorne’s cock.

“A bastard who intends to get off. No more games.”

“You love games.” Thorne grabbed Riley’s hips and held them tight, trying to stop him from moving. “Just try it. You can move back in with Marc if it’s so bad, but really, wouldn’t you rather wake up like this? Aren’t you tired of going back and forth between our places? My car service can take you to school every morning.”

Riley moved up, working himself on Thorne’s cock.

“How about a bet?” Thorne asked. If he was going to push, he might as well go all in. “If you come first, you have to move in for a trial period.”
Riley shook his head. “That’s insane.”

Thorne flipped them again and thrust hard into Riley, making him gasp.

“Because you know you’ll lose.”

“I know nothing of the kind.” Riley squeezed Thorne’s cock with his internal muscles, and Thorne shuddered. “You’re a manipulative ass.”

Thorne raised a brow. “Did you just figure that out?”

“Are you asking to be punished?”

Thorne groaned. “Yes, and wouldn’t it be more convenient to give me what I deserve if all your toys were here?”

“Fuck, how do you know just what to say?”

Thorne didn’t respond. Everything he could think of to say would get him in worse trouble. Instead, he demonstrated just how much he was enjoying being the one doing the fucking.

When he knew Riley was close, he gripped his hips hard and pulled out oh-so-slowly. “Sleeping next to you is so good, so warm, so perfect. I want you here. All. The. Time.” He punctuated his words with quick thrusts into Riley.

“And you always get what you want?” Riley’s voice was breathless.

“Not alllllllways.” But most of the time.