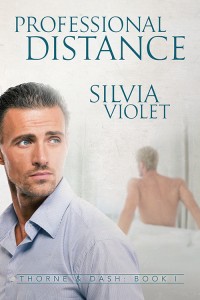 Thorne’s intercom buzzed. “A Mr. Dash is here to see you. He says he’s expected. Shall I send him up?”

“Yes, Je-Michaels, thank you.” Michaels had only been working as a doorman in Thorne’s building for a few weeks, yet Thorne had lost count of the number of times he’d almost called the man Jeeves. Michaels’ British accent and starched appearance simply begged for it. Years ago he’d loved to watch and re-watch the Masterpiece Theatre version of Wodehouse’s Jeeves and Wooster, with Clint, his—boyfriend was certainly not right, even lover didn’t fit—boss. His boss whom he’d occasionally fucked. Now, he couldn’t remember the last time he’d watched anything but videos of junior consultants’ meetings.

Two crisp knocks at the door signaled that Dash had made the long elevator ride to his penthouse apartment.

Thorne’s pulse sped up. He resented how very much he needed this respite from work, these moments where he actually let go of all his clients’ woes and indulged himself. Yet he kept paying for it, every week that he was in town. He imagined being fucked roughly, hands held down, as Dash whispered dirty words in his ear. By the time Thorne reached the door, he was already hard. Dash damn well better work out; but whether or not Thorne requested him to come back, he was going to get fucked tonight.

He checked the peephole out of habit, although Michaels and the other doormen were quite strict about checking credentials before allowing anyone in the building. The young man standing at Thorne’s door appeared to be in his early twenties, as were most of the service’s employees. He had dirty-blond hair that curled loosely and was longer than he could have worn it if he’d worked in Thorne’s office. His hazel eyes had a mischievous look to them that held promise. His smile, however, wasn’t at all what Thorne was expecting. It was fresh and sunny and it reached his eyes, a true smile, like he was meeting a friend, not conducting illicit business.

Quit trying to read so much into him. This isn’t a business meeting where you have to size up the clients. It’s a fucking hook-up that you paid for.

Thorne nodded and stepped back so Dash could enter.

“I’m Dash; Sheila told me you were a client of Marc’s.” Dash lifted the strap of the messenger bag he carried over his head and sat the bag against the wall in the entryway.

Fuck. Was he that transparent or was this kid that good? “What I think is that the rapport I had with Marc was hard to find.”

“He’s a switch and a damn good one.” Dash’s look said he knew that from personal experience.

“So am I.” Dash smiled, and Thorne reacted as if he’d wrapped his hand around Thorne’s dick.

Thorne’s gaze moved down Dash’s body. He was shorter than Marc, who’d matched Thorne’s six feet, maybe five feet nine or five feet ten. His body was lean but not without muscle. If Thorne had to guess, he’d say Dash was a runner. His tight black pants clung to his body, giving the impression he had a rather nice package.

“Shall I make you a drink while we discuss exactly what you’d like tonight?” Dash asked, wandering toward the kitchen.

It took a few seconds for the words to register in Thorne’s brain. Dash was…hot, fucking hot. But there was something else about him, something Thorne couldn’t define, that had Thorne salivating to get him naked and in bed. If Thorne believed in anything as hokey as “auras,” he would’ve said Dash had a powerful one. Thorne pushed the thought away, disgusted. Too much work and too little sex must have fried his brain. He’d been so busy that week he hadn’t even found time to jerk off.

Dash grinned and propped himself against the bar in the kitchen area, cocking his hip out. The pose was obviously calculated to make Thorne appreciate his slim waist. “That eager, huh?”

“I realize some people hire escorts for companionship. They want to know someone is listening to them. I’m sick of talking: to clients, to employees, to fucking airport desk agents. I don’t need you to pretend to be my friend. I need to be fucked.”

“Sure of that, are you?” Dash asked, walking around the bar and entering the kitchen.