Rush Around the Clock 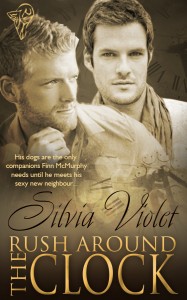 This story is also part of the 50s Mixed Tape Anthology
Patient soul Finn McMurphy teaches music and drama to middle schoolers. By the time he’s finished with after-school rehearsals and the private lessons he teaches to make ends meet, he’s too exhausted to think about dating or even hanging out with friends. He’s resigned to life with his music, his students, and his ludicrously spoiled Yorkies.

Then he meets Crawford Bixby. Crawford may be the most perfect man Finn has ever met—kind, good with kids, gorgeous, and completely unconcerned with Finn’s lack of ability to be coherent around him. Finn falls hard for him, but he’s terrified of what he feels. Will he be able to step out of the controlled world he’s created for himself and take a chance on love, or will he keep making excuses—rehearsals, papers to grade, dogs to walk—and push Crawford away?

Buy it from Totally Bound»