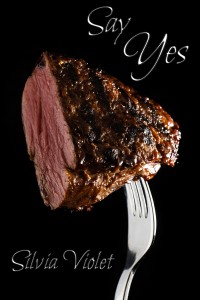 This story will release August 18. I will add buy links as they go live.

Rex Aiken recently started his own business, Grass Fed Texas, supplying organic beef to restaurants and catering companies. When he hosts an event for potential clients at a prestigious hotel in Asheville, the event coordinator, J, impresses him with more than his professional expertise. They indulge in a delicious one night stand, but Rex’s taste of J leaves him wanting more. Rex intends to savor J, and he refuses to see the distance between them as an obstacle. He’ll do whatever is necessary to convince J to say yes.

Buy it in from iBooks »

“So…um…you’re going to do some sightseeing tomorrow?” Jordan asked.

“I am. I haven’t been to this area since I was a kid, and it’s so beautiful this time of year.”

Jordan nodded. He’d picked up a pen and was rubbing the end of it over his full bottom lip. Rex wanted to replace it with his tongue. Jordan put the pen down and flipped through papers in a folder. When he licked the tip of his finger to help him unstick a few pages, Rex had to cover a groan by turning it into a cough.

Jordan glanced at him quickly before closing the file and slipping it into a drawer. “If there’s anything in particular you’d like to do, I could help you find the best—”

“I’d like to kiss you.” Rex hadn’t meant to be so bold, but he’d never been particularly good at restraining himself. His bluntness had served him well in business and almost as well in his attempts to pick up men.

Jordan made a strangled noise and looked up. “Mr. Aiken, I’m not sure that would…um…”

He looked terrified. Rex realized he was doing the same thing to Jordan that Lucy had done to him—putting him in a position where he could easily believe saying no would affect his job.

“I’m sorry. That was out of line. You did me a favor, and you deserve more respect from me.”