Sex on the Hoof 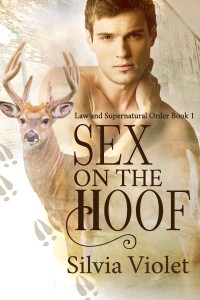 A stag and a vampire. Mortal peril. True love.

Deer shifter, Jason Fleetfoot, has turned his life around. After years of taking chances, he’s working as a crime lab technician, and he’s determined to forgo the risky behavior of his past. Then he meets Drew Danvers, the only undead detective in the city. Jason hates vampires, or does he? Drew defies all the stereotypes of his kind and something about him has taken hold of Jason and won’t let go. Jason might just dare to take a chance on a man others would label a risk to his health if not his very life.

This novella was previously published. It has been re-edited and expanded by over 35%.