Shadows in the Forest 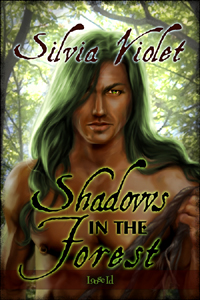 Marianne, a surveyor working for her father’s building company, finds herself working late at a job site. With no time to drive to the gym, she decides to take a walk in the woods. The winding trail isn’t well marked, and Marianne loses her way.

Darkness falls, and the woods are filled with a low keening like someone in pain. Marianne swears she is being chased. But whenever she turns around, she sees only the trees. She runs faster and faster until she stumbles over a root and falls at the feet of a man with rich brown skin and hair made of leaves.

Linden is the leader of the sprites sworn to protect a sacred wood. They are in mourning for the trees that have already been slaughtered by the humans encroaching on their home, They intend to do whatever is necessary to stop the builder’s progress.

When the builder’s daughter falls at his feet, Linden knows the other sprites will want him to kill her as a warning to those who dare enter their woods. But when he watches the beautiful the woman tremble as he ties her to the tree where he lives, he decides to use seduction rather than violence.

Linden awakens a deep-seated passion that forces Marianne to search inside herself and find the courage to protest her father’s plans for the woods. But can one human woman save a forest while fighting for the heart of its leader?

He was utterly, perfectly gorgeous, and from his firmly planted feet to the hard glare in his leaf-green eyes, he radiated dominance and power. Marianne had no doubt that she was in serious trouble. After several failed attempts, she sucked enough air into her lungs to make her voice work. “W-who are you?”

The man raised his brow. “You’re the one who’s invaded my woods. Shouldn’t I be asking that question?”

Marianne raised her brows. “Your woods?”

His lips curled up. “I see that you are under the mistaken notion that McMurphy Development owns the woods now?”

She supposed that was what she thought, but she stared at him and said nothing.

“It’s not my company. They’ve contracted me as a surveyor.” Why am I telling him this?

He sneered. “It is your father’s company. One day it will be yours.”

His words made her shiver with icy fear. Why did this man — or whatever he was — know who she was? She had to swallow three times before she could speak. “How do you know that?”

“I’ve been watching you.”

“Who do you think you are?”

Anger replaced her fear, making her brave. “What the fuck is that supposed to mean?”

He grabbed her arms, hauling her off the ground and pulling her to him until they were inches apart. She tried to pull back, but his hands squeezed her upper arms so tightly she had no hope of escape. She brought her knee up hard, aiming for his crotch. He twisted away without loosening his grip. He shoved her against the nearest tree, pinning the entire length of her body against the trunk.

“I could kill you right now.”

Marianne’s heart slammed against her chest so hard it hurt. She barely kept a whimper from escaping her lips.

The man smiled as if her fear pleased him. “Or you could cooperate and make this more pleasant for both of us.”

Panic seized her. She struggled in the stranger’s grasp, but he only pushed himself more firmly against her. His hands were as strong as steel bands, and his entire body felt as hard as it looked. She even felt the length of his hard cock pressed against her belly. The bastard was getting off on scaring her.

“Stop fighting.” His words were low and tight. He was seriously pissed at her. He couldn’t be a faery. He just couldn’t be. She would continue to tell herself that until she had no choice. Of course, that meant he was likely some psycho who kidnapped women in the woods. Her mind screamed for her to find a way to get free and get to her car.

The man flexed his hips against hers, and Marianne fought not to react. What the fuck was wrong with her?

The bastard smiled. He knew he was affecting her. “Are you ready to listen to me?”

She nodded. Maybe he would get distracted as he talked. Then she’d have another shot at getting loose.

“This is no normal forest you’ve chosen to desecrate. These woods are sacred to the Lord and Lady. I cannot allow you to harm them.”

Maybe he was just an enviro nut — still potentially dangerous, but not as likely to rape and kill her.

“D-did you read my mind?” She took a deep, gulping breath and nearly choked. Please, God, let me get loose before this gets any scarier.

She summoned the courage to look into his eyes. “Who are you?”

“I am the leader of the sprites who live in these woods.”

Fuck! He really was a faery, or at least he thought he was. “Sprites?”

“Yes, it is our duty to protect the woods. And we’ll do anything to see that our trees do not die. The others would have me kill you to show the humans what we are capable of. But I would rather use other means –” He punctuated his words with another hard roll of his hips. “– to convince you to help.”

Her body desperately wanted to know exactly what powers of persuasion he had at his disposal. But she wasn’t going to let her pussy do her thinking.

“Please, let me go. I’ll tell my father I won’t work for McMurphy anymore. I’ll not do anything to destroy the trees.”

The man bent his knees so he could rub his erection right against her pubic bone. “I’m afraid I can’t do that.”

She swallowed hard and tried to take a deep breath.

“You wouldn’t be safe if I left you here. If one of the other sprites found you, they wouldn’t hesitate to kill you.”

“Please.” The word came out before Marianne could stop it. Her mind raced. She forced herself to look at the man who held her, trying to discern if his hair was real or a wig. Perhaps he was only dressed like one of the little people to scare those who came into the woods.

He raised his brows. “Do you like what you see?”

Marianne forced herself to hold his gaze, not wanting him to know how scared she was, but she said nothing.

“I’m the best chance you have of surviving this night. If you want to live, you’ll agree to come back to my tree with me.”

Her heart pounded at the thought. Did he have a house by this tree? Would he hold her prisoner there? How would she escape if he took her even deeper into the forest? “How do I know you won’t kill me later?”

He smiled wickedly. “Why would I kill you, when I can bring us both pleasure?” His voice seemed to caress her neck with a feathery touch. She shivered, then gasped as strong, warm hands caressed her arms, her breasts, her legs, as if three or four men were exploring her body. How the hell is he doing that?

He laughed at her confusion. “That is only the beginning of what I can do. Will you come with me, or would you rather I leave you to die?”

Marianne tried to slow her panting breath. Her instincts told her to go with him. If he’d wanted to kill her, he could have done it at any time. He was certainly strong enough. Right now she had no way to overpower him, but if she went with him, she might find a better opportunity to escape. Surely there was somewhere she could hide until morning. “I’ll go with you.”

He leaned in close. She could feel his warm breath against her ear. “Wise decision.”

Marianne realized she didn’t even know the man’s name. “What should I call you?”

He smiled again. “Linden.” Without warning, he spun her around, pulling her arms behind her back. He ripped loose a vine from the tree behind her and wound it around her wrists.

She jerked, trying to get free, but he’d secured her tightly. “Damn it! I said I’d come with you.”

He laughed. “You can hardly expect me to trust you.”

She snorted. “You’re expecting me to trust you .”

“No. I’m expecting you to obey me.” He scooped her up and tossed her over his shoulder.