Snowbound: Saved by a Vampire 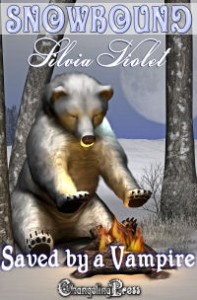 A young woman becomes stranded in a blizzard, and her only hope is a stranger with fangs.

Sandra huddled in the corner of the abandoned cabin, wrapping the moth eaten blankets even tighter around herself. Why the fuck hadn’t she believed her brother when he insisted it was going to snow? She knew how quickly a blizzard could come up around here, but she’d ignored his warnings.

Now she was lost and her only shelter was a rickety cabin that barely kept out the wind. Unless a miracle occurred, she wouldn’t live long enough for him to say “I told you so.”

Snow swirled through the chinks in the wall, forming a white blanket on the floor. Sandra’s eyes started to drift closed. She shook herself awake. If she went to sleep now, she would never wake up. She needed to get up, move around, stave off hypothermia as best she could.

As she forced her nearly frozen limbs to move, she heard something outside the door. Please God, let it be a rescue party.

The door swung open. The flickering light of her flashlight allowed her to see the outline of a tall man. Her heart hammered.

He stepped further into the light, and her breath caught. Long, mocha-colored hair flowed across his shoulders and down to the middle of his back. His eyes were deep brown, almost black, his skin nearly as pale as the snow that covered his tall black boots. His tight pants showed off powerful thighs and a trim waist. Suddenly she felt warmer than she had since the storm began.

He smiled, a wicked upturn of his lips. Then she saw them. Fangs. Her heart skipped a beat. She was dreaming. That was the only explanation. She’d fallen asleep, and she was near death. Maybe he was death come to collect her. “Who are you?”

“I’m your hope for salvation.”

She laughed, sounding hysterical. “No man as beautiful as you would bring salvation.”

“I can save us both if I feed from you.”

Her stomach flip-flopped. “Feed from me?”

He ran his tongue over his fangs. When he spoke, his voice caressed her as if it could reach inside her clothes and bring her cold skin back to life. “I too lost my way in the storm, but I smelled you. I heard the pounding of your frightened heart and knew that your blood could save me.”

Sandra fought the panic rising in her. Her body throbbed with need, yet the man had not even touched her. This could not be real. “You’re a vampire?”

“Some would call me that.”

“I must be dreaming.”