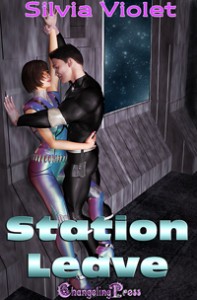 Sabra Dexter, an employee of Inter-Galactic Shipping, just completed a two-month run with a crew who couldn’t find their heads if they weren’t attached, rations that consisted almost entirely of beans, and the tedious job of managing every ounce of cargo on her ship. She needs a vacation and some hot sex.

When her ship docks at Cisco Station for three days, she intends to find some good food, and a man to satisfy her pent up needs. But she doesn’t expect to find them in the same place. When a mix-up with her food gives her the chance to talk Nick, a gorgeous crew captain from a rival shipping company, she gets up the nerve to invite him to join her for the evening. Sabra quickly discovers that he loves dominance games as much as she does, and they spend a delightful, exhausting night together. Sabra intended to have a one-night stand, but she quickly realizes she feels more for Nick than just desire. Can a station leave liaison become a relationship, or should she cut her losses before she gives up her heart?

By the time they reached Nick’s cabin, Sabra’s body thrummed with excitement, and the seat of her flightsuit was seriously damp. She and Nick hadn’t spoken on the short elevator ride. She felt ridiculous making small talk to fill the time, and she’d never been good at sexy banter.

She’d propositioned men during station leave before, but it had always been in a club or when she’d been drunk enough not to care. Her quest for a partner had never seemed this calculated before, not that Nick seemed to mind. When she’d glanced down as he pressed the call button for the lift, she’d noticed a sizeable bulge in his flightsuit. He was hard and ready to go. She had to prevent herself from jumping him right there.

She handed it to him, and he scanned it through the room’s computer. Within seconds he verified that she’d taken her most recent dose of anti-STD vaccine and chosen the birth control option. He scanned his own card so she could see that he was also clean. As she put her card back in her belt holster, she steeled herself for some awkward moments before they officially got down to business.

But she needn’t have worried. The second his card was secured, Nick grabbed her and pushed her back against the wall. His mouth locked on hers in the most ferocious kiss she’d had in years. Her tongue tangled with his, and her hands went to the fastenings of his flightsuit, desperately needing to get him naked and see the gorgeous body she knew was hidden underneath.

She opened her legs so he could rub his hard cock against her. Damn, it felt good. His hands slid up her stomach to her breasts, and his thumbs flicked across her nipples, making her gasp. She succeeded in getting his suit open to the waist, and he let go of her long enough to shuck it completely. She worked the fastenings of her own garment while she watched him.

The muscles of Nick’s chest were perfectly defined, and Sabra wanted to run her tongue over each one so she could give his body the worship it deserved. As she’d suspected, he wore nothing underneath the suit. When he pushed it past his hips, his cock sprang free, and her hands froze on the final clasp of her suit. His shaft was almost dauntingly thick and so perfectly formed it would do justice to the most beautiful sculpture.

When he kicked off his boots and the flightsuit, rendering himself completely naked, she forced herself to
look up.

“Good.” He knelt in front of her and pushed her hands out of the way so he could finish undressing her. He peeled her suit off her arms and down to her waist. Then he leaned forward and swiped his tongue across her abdomen. The sensation created such a rush in her body that she jumped.