Submission on the Run 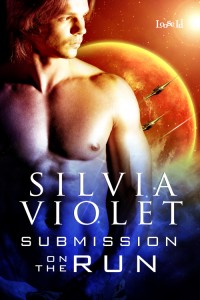 After her mother’s death, Princess Alcina of Boetia took over the job of raising her younger brother, a boy who will one day be king. Her father’s increasing depression over the loss of his wife has forced her to shoulder much of the burden of running a planet where most men don’t recognize a woman’s right to rule herself, much less a government. Alcina is close to snapping from exhaustion, but she refuses to trust anyone with her responsibilities.

Ivan is a Lalatian dominant sent to make contact with the Boetians and convince them of the importance of forging alliances between the universe’s older races. He is immediately drawn to the fiery, independent Princess Alcina. He soon realizes that under her bravado she hides a need to give up her hard won control. He wants nothing more than to teach her the beauty of submission.

An ancient Lalatian prophecy foretells the intermarrying of the ancient races. The more Ivan interacts with Alcina, the more convinced he becomes that she is his intended mate. Alcina admits to her lust for Ivan, but she fears what will happen if she submits to the domination she craves. Can she let go enough for the love that is growing between them take root, or will the political tension on Boetia and the fear in her soul force them apart?

Buy it from All Romance Ebooks &raquo

Buy it from Amazon &raquo

The king turned toward Ivan as he walked across the balcony. “Good morning. You’ve arrived in time to see my daughter defeat yet another set of suitors.”

Ivan smiled at the king. “I understand the princess has unsurpassed racing skill.”

The king nodded. “Indeed she does. When the race is complete, I shall give you a proper greeting and introduce you to my advisors. For the time being, I would ask that you join me here. The competitors should be cresting the hill soon.”

Ivan gave a slight bow and looked in the direction the king gestured. Boetians were as secretive as Lalatians, so he’d been able to learn only the barest facts about their culture before making his journey. A group of Boetian merchants had been on his last flight, and he’d listened in as they discussed the princess and her race. “Is it customary on Boetia for young women to race with their suitors?”

The king laughed. “Nothing my daughter does is customary.”

Ivan wasn’t sure how to respond so he simply waited, hoping for further explanation.

“It would have been customary for my daughter to marry a man of my choosing when she reached her majority five years ago. But she refuses to marry any man who cannot best her in an athletic competition. I want her to choose a mate, but I also want her happy, so I’ve indulged her. I never thought she would hold out this long.

“When I refused her request to wrestle potential suitors, she devised the idea of an annual race. For the last five years, we’ve held a race every midsummer day. Any man from Boetia who wishes to compete may run against her. Every year she has beaten all competitors easily.”

Ivan nodded. “I see.” The princess sounded more and more interesting all the time. As he thought about her need to be bested, his hunger to dominate a woman flared to life. He would have to feed soon if he was going to keep himself under control. In the brief negotiations between the Lalatian Council and King Schoeneus, the king had promised that Ivan would be supplied with women who would be more than willing to feed all his hungers. He hoped to arrange for one of them to meet him in his suite as soon as the race ended.

He forced himself to ignore the needs of his body and concentrate on the road where the runners would appear. A few seconds later, a woman crested the hill. Her skin and hair were the same color as the sea that formed the southern border of Kedalion. And like the other competitors, she was utterly naked. His cock hardened uncomfortably as he watched her perfectly round breasts bounce with every stride. Her nipples were deep blue, like the sea under a night sky. She was so far ahead of the next competitor that Ivan had no doubt she would win.

His heart pounded as he watched her. The closer she came, the more details of her body he could see. She was hairless, except for the curly blue-green hair on her head, which hung just past her chin. It matched her skin perfectly, which meant she’d kept it natural, unlike some of the Boetian women he’d seen on his way to the palace. He knew her eyes would be the same absorbing color. She had well-defined muscles that showed her dedication to exercise. But she also had plenty of curves, ones he’d like to run his hands over after he’d tied her to his bed to await the stroke of his whip.

Gods, he had to get himself under control. He’d come to Boetia to discuss a visit from a larger group of Lalatians who would look for mates among the Boetian women. He would never win the king’s consent if he couldn’t control himself around the princess.

But no matter how inconvenient, he couldn’t stop thinking how delicious it would be to hear the princess scream as his hand pounded her ass and then beg for more while he shoved his cock deep inside her. When she crossed the finish line, winning the race by a good distance, Ivan took a deep breath and prayed he could think clearly enough to form an intelligent sentence.

The king sounded as if he needed commiseration, but all Ivan could do was nod. Alcina was ascending the steps to the balcony, still gloriously naked.

A growl rumbled in his chest before he could stop it. Hadn’t the king studied anything about Lalatians? Did he not realize his daughter was in trouble? The king knew his nature so he should know not to parade a beautiful, naked woman in front of a hungry Lalatian dominant. Especially not a woman who radiated a need to be conquered like the princess did.