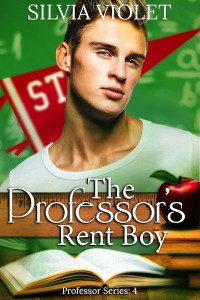 When Dr. Lucas Caldwell works up the nerve to visit a high-end sex club, he discovers Gavin, the student he’s fantasized about for the last year, working there. Gavin offers to be his companion for the evening, and Lucas can’t make himself say no to his favorite dirty fantasy.

Buy or borrow it from Amazon Kindle Unlimited »

Lucas’s pulse pounded in his ears. Was he going to run away or see this through? He found his legs moving before his brain had decided which path to take. Of course, his brain had little to do with this decision.
The host gestured toward a booth. “Please have a seat and your companion will join you shortly. Would you like a cocktail or a glass of wine while you wait?”
“A Cape Cod, please.” Lucas figured at least some amount of alcohol was necessary if he were going to see this through.

Companion. As if they might be going to have a stroll about town. Had he traveled back in time to the 1880s and this young man would be his valet/guide on the Grand Tour? No, nothing so innocent as that. He’d actually hired a rent boy. What the fuck was he thinking?

Before full-on panic took him, Lucas saw a man approaching his table. He was blond, with a slight frame, but Lucas couldn’t make out any details of his features in the low light. Was he The One?
Lucas’s heart hammered. He took a sip of his drink, but no amount of vodka could truly fortify him for this.

He sputtered, swallowing the drink the wrong way. As he worked to calm the coughing fit, he looked at the young man more closely. “Gavin?” No, this wasn’t happening. The kid had been in his Latin 1 and 2 classes last year. He was a history major interested in Medieval studies, a protégé of Dr. Pemberton, and he was… here.

“Hi,” Gavin said as he slid into the booth across from Lucas.

“Wh-what are you doing here?”