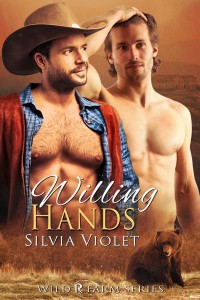 Will has a temper as wild as the bear he holds inside. Normally he’s an easy-going, caring guy, but if someone crosses him, he uses his claws and shifter strength to set them straight. His temper ruined his chance at the career he wanted, but now he’s working at Wild R Farm, enjoying the camaraderie and longing for more with one special man.

No one at the farm knows much about Ryan. He’s done time in prison, and he carries scars that tell of something horrible in his past. When he gifts Will with one of his rare smiles, Will decides to do whatever it takes to get him to smile more often. Will is used to being a protector, and even when he learns Ryan’s dark secrets, he refuses to turn away. What he doesn’t realize is that he needs Ryan’s quiet strength as much as Ryan needs someone to show they care. Ryan’s past threatens to send him running, but Will and the rest of the crew of Wild R prove that no matter the danger, they take care of their own.

Buy it in from Barnes and Noble »