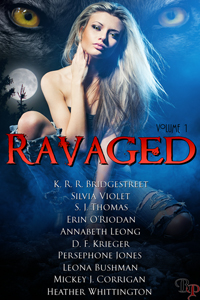 To celebrate the release of Ravaged this weekend the authors have done a little Q&A hosted by five of the authors on their blogs.

Each blog features two interviews and if you comment you have a chance to win one of 10 PDF copies of Ravaged kindly donated by all the authors.

The blog links can be found below so please go and check out all the interviews.

An Interview with Annabeth Leong

Summary: A mysterious innkeeper’s warnings are part of the spooky thrill Kyle hopes to get when he climbs to the ruined altar of Zeus at the top of Greece’s Mt. Lykaion. The thrill turns to terror when Kyle returns from his expedition with the curse of the wolf. His girlfriend Melissa turns to the innkeeper for help, and discovers that the traditional “Arcadian cure” for the curse calls for sexual adventures far beyond what the couple has previously dared to try.

I love researching myths and folklore in preparation for writing a story. I looked up a bunch of stuff about werewolves, and discovered that the ancient Greeks and Romans believed exhaustion could cure lycanthropy. In my story, the cure for the curse of the wolf requires a very particular kind of exhaustion…

“Surely, you have seen what happens to a man after he spends his essence. That’s exhaustion. But be warned. The wolf is more…vigorous…than any normal man.”

I’ve been writing all my life, and I believe a person becomes a writer by practicing writing. Anyone who sits down and puts in the time on a regular basis deserves the title. I’ve been writing and publishing erotica specifically for about three years. For me, that was an exercise in self-acceptance. I let go of my ideas of what I ought to be writing and started writing what I wanted to write. It’s been tremendously freeing.

In October, Breathless will publish my werewolf novelette, Not His Territory. It’s based on a different conception of werewolves from that in “The Arcadian Cure.” In Not His Territory, werewolves as a society are weighed down by legalistic traditions meant to keep their animal natures in line. The story is about the woman who inspires a Werewolf Council investigator to break out of that culture of restriction.

I keep a full list of available and forthcoming stories on my blog, http://www.annabethleong.blogspot.com/ and welcome anyone interested in other work to check it out. It’s currently running down the right side of the front page.

The part of the process that a writer has control over is the writing. I recommend scheduling regular time to write and sticking to it. A person can’t help but get better at writing with frequent, faithful practice. Having a solid foundation of regular writing is the only way I can handle acceptance, rejection, revisions, and all the administration and emotion that go along with publishing.

I am like a little kid. I love pizza, french fries, and milkshakes.

A short list: Tombstone, Legally Blonde, Clueless, and The Warrior’s Way. I have two quite opposite streaks of appreciation.

I have never worked my way through The Kama Sutra.

An Interview with DF Krieger

I often wonder what a zoo would be like after dark.

She’d learned long ago that the darkness boasted things—creatures—that could be as cruel as they were kind.

I’ve been writing for as long as I can remember. I don’t know how I became a writer, there’s been a book in my head and a pencil in my hand since I could draw and long before I could read.

Quite a few books in both regards. You can check my website for me details.

Edit your work before you send it to a publisher. Too often a manuscript is turned away because an author didn’t bother to even run a spell check.

A panther, for sure!

Poked a badger with a spork.