On July 1, Samhain Publishing will release my spicy historical, To Capture A Spy, which is set in France in 1814.  And in a few weeks, Changeling Press will release my latest short story, Stallion’s Summer which is a sequel to Stallion’s Gambit.  I’m s-l-o-w-l-y working on a novella to wrap up Raya and Calder’s story so look for news about that. 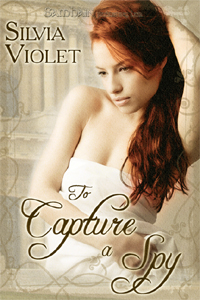 When danger lurks, is courage alone enough to save a country—and a heart?