Arresting Love – Chapter One Sample and a Contest 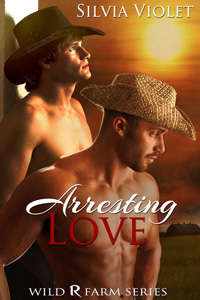 Here’s the first chapter of my brand new release, Arresting Love (Wild R Farm 2). Leave a comment on this post for a chance to win book 1 in the series.

When Cole finally pulled back, the look on his face made Billy’s chest ache. No one could miss seeing Cole’s love for Jonah. They had a bond that was strong as steel, and Billy was jealous.

Four years ago when he’d been hired as barn manager at Wild R Farm, Billy had developed a crush on Cole, but he’d quickly realized Cole would never see him as more than a friend. He’d accepted that. He treasured their friendship, and he’d never forgotten that Cole had given him a chance when he could have hired someone better educated with years more management experience. But watching Cole and Jonah together made him long to connect with someone. Having a man look at him the way Jonah looked at Cole would be a taste of heaven.

Cole snorted. “Me either. I’m about to get rid of everybody since we’ve rung in the New Year. This whole party thing was Jonah’s idea. I had a much better plan for the night, but he wouldn’t listen.”

Jonah’s brother, Nathan, had kidnapped Jonah, drugged him so he had to remain in horse form, then sold him. Fortunately, he’d ended up at Cole’s friend’s horse sanctuary. As Cole and the rest of the crew at the farm fought to keep Jonah safe, Billy ended up in a fistfight with Nathan. In the aftermath, Cole finally realized Billy had hoped for more than friendship between them. Fortunately, Cole hadn’t freaked out, but he was still sensitive about talking to Billy about his relationship with Jonah. Billy wished he’d just get over it.

Billy put up a token fight, but in the end, giving into Cole’s plan was the only option since he threatened to bodily remove Billy from the farm. So, against his wishes, Billy had driven to Nashville, checked into a fancier hotel than he’d ever stayed at in his life, plopped down on the bed, and stubbornly started making spreadsheets for the next week’s horse training rotations. Cole could make him leave the farm, but Billy would be damned if Cole would keep him from thinking about farm business.

A few hours later Billy ordered a burger and watched a pointless movie filled with motorcycle chases and things blowing up. At least the fast-paced film distracted him from the quiet of his room. At the farm, he was never lonely for long. Here, in a hotel room, it was painfully obvious he had no one to share this forced vacation with.

He survived the evening holed up on his own, but the next day he got restless and decided to go for a walk. The temperature was hovering around freezing, and the wind cut right through his fleece-lined jacket. He noticed some beautiful carvings of horses in a gallery window. Danielle, the farm’s head trainer, would love them.

The gallery appeared to be having a craft fair, and he decided to take the opportunity to get out of the cold. He found the booth with the horse carvings. They were so detailed and life-like they looked like they might take off running despite being only six inches high. He purchased a galloping stallion for Danielle then spent nearly half an hour talking with the artist and his partner. They reminded him of Cole and Jonah. They had the same settled, unabashedly-in-love look about them. He sighed as he waved good-bye and headed back into the cold.

He shivered as he stepped out of the gallery. The wind howled along the storefronts, and it felt as if snow was on the way. He scurried across the street into a coffee shop. He’d joked about designer coffee plenty of times, preferring his brew strong and black, but he was supposed to be on vacation, and he did have a thing for chocolate. So, after a casual glance to make sure he didn’t see anyone he knew, he ordered an enormous mocha with whipped cream and chocolate sprinkles on top.

He sat down with his drink and pulled his tablet from his satchel. He read some articles on the care of newborn foals. Then he scanned through some of the horse care message boards he frequented. By the time he’d finished his drink, he was jumpy from the caffeine. He couldn’t sit still any longer. He walked around the city for a while, trying to ignore the cold that seemed to settle all the way to his bones. He hated winter. He’d much rather be dripping with sweat on a burning August day than checking the sky anxiously for snow. Sooner than he wanted to, he headed back to his hotel where he flipped through channels and paced the room.

When the silence got to be too much, he decided to go find a bar. He didn’t think there was a chance in hell he was going to meet someone who was interested in more than a quick fuck, but if a warm body next to his for a few hours was all he could have, he’d take it. He was on vacation after all. Maybe with a few drinks in him, he wouldn’t care so much.

He did a search for gay bars in the area and found one a few miles away. He considered walking so he could drink as much as he liked, but when he glanced out the window a wet mix of sleet and snow had started to fall. No way was he walking in that crap. He shouldn’t drive in it either, but he couldn’t spend one more minute in the hotel.

Buy it at BN