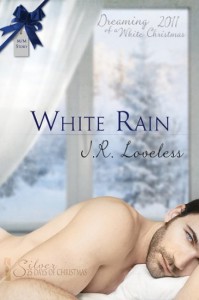 Since I was a baby, my mother has always made pumpkin bread from a recipe she’s had since before I was born. Whenever I have it, it brings back memories of family, friends, and loved ones.  I wanted to share this amazing recipe with everyone along with an excerpt from my new upcoming Silver Publishing’s Dreaming of  a White Christmas release ‘White Rain’. Snow brings memories back for the main character, reminding him of the one person he loves more than anything. Enjoy a slice of the most amazing pumpkin bread while reading my newest release due out December 8th! Merry Christmas and Happy Holidays, everyone!

Mix the first six ingredients. Add the following in order:

Pour into 2 greased and floured loaf pans or 3 (1lb) coffee cans. Bake at 350 degrees about 1 hour. Check with a toothpick, if it comes out clean, that means it’s done.

Brand has spent the last four Christmases without the one man he loves more than anything. After Kia left for college, everything changed. Can Brand forget Kia, or will Santa Claus bring him what he wants most for Christmas?

Kia stared at his best friend’s back in silence. He watched Brand’s muscles ripple beneath the dark gray shirt he wore. Brand looked even more beautiful than the last day he’d seen him. He still had a good six inches on him, but Brand’s body had filled out in all the right places. Amber haircut and combed neatly made Kia’s fingers itch to muss it all up, and it stung that he didn’t have the right to do it anymore. Not yet at least. The steel gray eyes he adored had seemed so cold as they’d studied him out on the front porch. Even now Brand refused to look at him.

Watching his friend setting a fire to crackle in the fireplace sent melancholy spiking through him. He’d missed Brand every single day, so much so it began to feel as though he couldn’t breathe, but he’d been determined to give Brand a reason to be proud to have him in his life.

Pain twisted his insides at how much he’d hurt Brand in his selfishness. It wasn’t until he’d spoken to Brand’s mother that he realized how much he had. She’d told him that Brand was  always alone and seemed so withdrawn from people after he’d left. The solemn facade had drawn him to Brand in the beginning. They’d met when they were thirteen; Brand kept to himself, either reading a book or staring into space. Regardless of the cold reception he received at first, Kia kept trying day after day to draw him out of his shell. It took time, but eventually he’d succeeded and Brand had opened up to him. It appeared that his desire to protect himself had only served to return Brand to the solitary person he’d once been. His throat felt dry as he searched for the words to explain why he’d stopped calling Brand, stopped writing or e-mailing him. How could he make him understand that he’d only done it because it hurt too much? Every time he’d talked to Brand on the phone, every letter or e-mail he’d read about his friend’s life, sent a knife straight into his heart. “I missed you, Bran,” he finally choked out around the lump in his throat.

Brand gave a cynical snort and turned hard eyes toward him. “Missed me, Kia? When? When you were too busy to come to the phone? Or maybe it was when you never returned my letters?”

Kia moved toward Brand only to stop as Brand took a step back. His heart sank even lower into his stomach, but he persisted in trying to make the one man he loved more than anything understand why he’d done what he had. The silence stretched out for long moments between them before he found what to say. He hugged himself as he started talking, staring anywhere except at Brand. “When I left for college, it was hard, Bran. So hard to be away from you. I wanted nothing more than to come home. But I couldn’t. I had to finish because I didn’t want to end up like my mom.”

“I thought the more contact we had, the easier it would be. But it wasn’t. It was harder and made me miss you even more. So I selfishly started avoiding your calls and replying to your letters. At least, sending my replies to you. I wrote a letter every week telling you about school, work, and any little thing that came to mind but I never mailed them. I couldn’t.”

He had an entire bag filled with the letters he’d written Brand. One long letter every week for two years was a lot of letters. He’d planned on giving them to Brand when he returned and they were still in his suitcase out on the front porch. “I need you to understand, Bran. I wanted you to be able to be proud of me and have someone in your life worth knowing. Not someone who’d come from a poor family and has a weak mother with a bastard for a stepfather.”

“I didn’t care about that,” Brand said hoarsely, his hands clenched at his sides. When he looked up at Kia, Kia’s heart broke even further at the anguish in Brand’s eyes. “I needed you, Kia. You promised you’d never leave me.”

Kia took a tentative step forward, his heart lifting when Brand didn’t move away this time. He continued until he stood right in front of him. Brand’s dark amber hair seemed longer than he’d remembered it, and there were lines around his mouth and eyes that hadn’t been there before. He reached up to lightly trace those lines with the tip of one finger. “I didn’t leave you, Bran. You never left my mind, my thoughts. All I could think about was getting home to you. I’m sorry. I never realized how much it would hurt you.”

Brand’s lips twisted and he reached up, grabbing Kia’s wrist to stop his movements. But he didn’t push Kia’s hand away. He merely kept it in the loose manacle his fingers made. “Not hurt me, Kia? I…” His Adam’s apple bobbed as he swallowed hard.

“What, Bran?” Kia pushed closer until the fronts of their bodies rested against one another. “Talk to me. Please.”

It didn’t look like Brand would say anything at first. His mouth opened and shut several times but nothing came out. Kia’s face fell. He wondered if maybe Brand had moved on without him and no longer loved him. He’d known how Brand felt about him. He’d seen it in the way he looked at him, the way he would unconsciously move his body toward him when they talked or almost hovered over him protectively in large crowds. It had taken the knowledge of Brand’s feelings to make him realize he didn’t want Brand saddled with a high school graduate who would go nowhere in life.

A whisper of words left Brand’s lips, sending agony crashing over him like a tidal wave. “I loved you, Kia. You broke my heart when you left, when you stopped replying to my e-mails and returning my phone calls.”

Loved? Did Brand no longer love him? Kia’s eyes grew moist but he blinked back the tears. He knew he had no right to expect him to love him after he’d practically cut all ties with him. “I’m sorry, Bran,” Kia murmured. “I always intended on coming back. I could never leave you

for good because I’ve loved you almost from the moment I met you.”

Brand stiffened, his gaze snapping up to meet Kia’s in shock. Kia smiled softly, reaching to cup Brand’s cheek. “Why do you think it hurt so much to leave you and why I wanted to come back home so badly? I do love you, Bran. I always have and I always will. Can you forgive me and

allow me to earn back your love?”