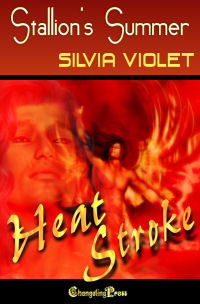 Changeling Press has released the first stories in the new Heat Stroke series and Stallion’s Summer is one of them.  Check it out here!

The beginning of the story:

Raya exited the aged transport that had brought her to Oriana and thanked all the deities she could name that she’d made it there in one piece. The planet was beautiful, and a few months ago she’d had the best sex of her life on this backwater outpost, but gods above, couldn’t the locals invest in some modern ships?

She used her absurd lace handkerchief to wipe the sweat from her brow. She’d thought the weather hot the last time she’d visited Oriana. But now it was full summer, and the transport pilot had reported a surface temperature of 110 degrees Fahrenheit.

She wondered what the locals would do if she donned a short, cool-cloth suit, the only garment she’d normally consider in such heat. They’d probably arrest her for indecency. Calder would get the charges dropped and her comfort would almost make it worth the trouble. But getting thrown in jail would delay the long, hard fuck she needed from Calder. That was not acceptable.

Between her raging desire she’d been unable to slake and the blazing Orianian sun, she feared she might explode. She needed to find Calder fast, get some relief for her aching pussy, and then sleep for about twelve hours in a climate-controlled room.

Since she hadn’t bothered to inform Calder that her client was finally ready to close their land deal, no carriage awaited her. She would have to walk the three miles to his estate. As the heat pushed against her in oppressive waves, she wished she had called. But if she had, Calder might have asked annoying questions like how long she planned to stay and whether she had reconsidered his offer.

No, he wouldn’t ask that. He’d warned her that he wouldn’t ask her to stay again. She’d blown her chance. Surely that didn’t mean he wouldn’t be excited to see her? She supposed he had a right to be angry. She had left without saying goodbye. But his cock would respond to her, and that was what mattered, wasn’t it?