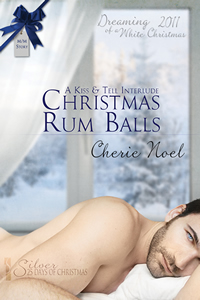 Part and parcel of my holiday story is one of my favorite Christmas recipes. I wrote it into the story so I’ll give you the recipe as it occurs at the end of my story, Christmas Rum Balls. I knew I wanted to use the cookies in a Christmas story, and then when I realized how much my main character Tony loves to cook it was an easy step to get him to divulge his super secret recipe for the good of people everywhere.
Tony’s Rum Ball Recipe

So youse can make em with the kids and old folks and people who might not remember the rules about makin’ hot stuff.

No, really, they do.

2 ½ cups of Nilla wafers. Crush ’em up good. Youse gonna start out with a whole box of the suckers, but when they gets crushed? 2 ½ cup.

2 tablespoons of cocoa. (Me? I love this stuff)

1 ¼ cups icing sugar. Youse can find it in the baking aisle in the grocery store. Just ask the clerks, ’cause they always know where ta find stuff.

½ cup of Spiced Rum. Or youse can use Bourbon. But, the cookies are Rum Balls, so I think youse should use the rum. On account of that’s what they’re called.

1 cup of pecans or walnuts, broke up kinda good. I like the walnuts better. ‘Cause putting something called “pee can” in my food just seems wrong, youse know what I mean?

Now youse need to know how ta put it all together.

Youse gotta mix the cocoa with 1 cup of the sugar in a special way the fancy cooks call sifting. If youse don’t have a sifter, youse can just mix them up real good. But youse might wanna think about using maybe a fine mesh colander. That could do for a sifter in a pinch.

Mix the rum and the syrup together, and then stir them into the cocoa an’ sugar mix.

Pour in the crushed up Nilla wafers (I guess any vanilla wafers would work, but I like the Nilla ones) and the nuts.

Mix everything up real good.

Make little bouncy balls or walnut size balls. Then youse can either roll them in the remaining icing sugar or leave ’em plain. I love sweets, so I put the extra sugar on.

Then youse just store them in a tin.

It’s best to make Christmas Rum Balls a little early so they have time to sit and get tastier. So make them about a week before youse wanna eat ’em.

Santa Neil in leather, elf Tony in a sock;
Watch naughty Kevin, falling like a rock.
He’s off the nice list—coal city’s straight ahead,
‘Til a miracle’s made with wrist restraints, a bow and Rum Balls in their bed.

Santa Neil and Elf Tony have a problem. Their wayward boy Kevin, fallen off the nice list and headed straight for coal-in-the-stocking-city, is hauling around a truckload of unnecessary guilt.

Together, they mix up a brand new recipe for Christmas fun, complete with Santa Neil in leather, Elf Tony in a smile and a strategically placed sock, and of course, some delicious Christmas Rum Balls. Their bring the big day early, but one question still remains…Can they entice Naughty Kevin to release his burden and open his sweet self to the Christmas spirit all around him?

Neil looked up from the freshman Art History term papers currently causing both his red marking pen and his eyes to bleed.

Tony stood just inside the door of Neil’s home office, squarely in front of Neil’s wide oak desk, naked from the waist up. Flecks of red in various shades dotted his torso. Neil smiled. The spatters of red paint on his lover’s body were a damn sight easier to look at than the mutilations of both art and history most of this term’s freshman class routinely handed over in lieu of well written papers.

Tony cast a worried frown over his shoulder. “Would it be okay to shut the door, do youse think, Neil? ‘Cause I don’t wanna break none of the rules, but I don’t want Kevin ta hear this part.”

Neil’s eyebrows crept toward his hairline. The open door policy was one he’d come up with. Tony seemed to be taking it quite literally today. Neil bit the inside of his cheek. Tony had come so far since his injury. Some days Neil had to remind himself that his lover had suffered a traumatic brain injury at the hands of a former boyfriend.

Tony had come into the ER on a day Kevin picked up an extra shift to cover for a friend in need, and Tony had been his last patient of the day. Kevin still held on to guilt over not doing more to help Tony that day, before the second beating happened. Everyone else, including Tony, believed the helpline numbers Kevin had given Tony during his exam had saved the big Italian’s life.

Tony had been on the phone with the helpline when Robert broke into the room Tony was hiding in and beat the big gentle man into unconsciousness. The helpline worker had heard the breaking door, and placed an immediate call to 911. Tony had gotten help as fast as was humanly possible.

Neil thought the amazing recovery Tony had made could rightly be attributed to Kevin as well. Kevin had gone beyond the call of duty when Tony ended up on his regularly worked floor. He made sure that Tony got every rehabilitative therapy offered, and when it became clear that Tony would need additional assistance once he got out, the sweet nurse had taken Tony into his own home as first a house guest, then as he recovered enough to return to his art studies, a roommate, and finally, at Tony’s insistence, as a lover.

Tony turned from the door, a crinkle marring the smooth olive expanse of his forehead. His big, melted chocolate eyes zeroed in on the marking pen Neil was tapping against the desk. Then Tony looked up. The pupils of his eyes were blown wide, turning them to dark fathomless pools. The corners of the big Italian’s mouth pinched together, a line of white ringing his lips.

Neil stilled completely in his chair.

Tony had bad days though, days where he had mini seizures or was especially forgetful, days where he clung to the “rules” Kevin had originally come up with, back when the two of them first lived together. On his difficult days, Tony sometimes treated those bloody rules like they were the only thing holding him steady, and he would even speak of feeling frightened one of his lovers would lash out at him in anger. Neil took a quick deep breath, struggling to unclench his jaw.

He hated Tony’s bad days. Neil did everything he could to make them better, and fewer. The bad days took a toll on Tony, Neil, and, most especially, Kevin.

Neil’s anger had nothing to do with Kevin, the rules, or the gentle, lumbering oaf who became a surrealistic, graceful work of art in his own right when a smile lit his face or one of his passions consumed him.

And lately–Neil fought to keep his grin of delight tucked inside lest Tony misinterpret the expression–Neil himself. The smile escaped. Tony gave a faint answering smile, and Neil’s heart clenched.

Neil thought the three of them would have found each other even if Tony hadn’t needed a third partner to feel safe. The process would have likely taken longer and Neil had long since given up trying to decide if he were more happy they had found each other quickly or sad about the events leading to their finding one another. Neil leaned back in his chair, carefully placing his pen down, and addressed Tony’s question about the door.

“Sure Tony. You can shut the door.”

Tony spun around, peered into the hall cautiously, and then eased the door shut. He strode back to the desk, leaned down and spoke in a hushed voice.

Neil’s eyes widened. He bit back a rueful laugh.

“Tony. Er, what makes you think Kevin believes in Santa?”

Tony stood up, put his hands on his hips and cocked his head to one side.

“We was fucking in the kitchen. On account of he came in to get his dinner together for work today looking especially good. Youse know how he rolls outta bed sometimes looking like he just got done real good? Yeah, so that’s how he was looking. And he came in all slow and needing coffee and bent down over the table.”

Tony paused there. He scrunched his nose up, and patted his chest.

“I’d been paintin’ in the studio, cause if I don’t get the oil paintin’ I’m working on of the tree out back done before the leaves finish changing–well. Youse understand. The reds might not be the same next time.”

Tony scratched at his cheek.

“So, anyways, I can just stand so much. I came in to get a cuppa joe, and there he was all sleepy an’ fuckable.”

Tony shrugged, a dreamy little smile flitting across his face.

“Anyways, Neil, when we was done, he was all outta breath an’ looked even better than when we’se started, an’ I told him I knew just what I wanted from Santa.”

Tony shook his head. He waved one hand above his head.

“Kev got this real anty look on his face, Neil. Youse know, like he was carrying somethin’ heavier than he is, like the time you and me saw the documentary ‘bout ants on Animal Planet? So then he told me I’d been real good so Santa was sure to bring me what I was wantin’. He spoke all serious like, and then he took off for the shower.”

Tony worried one corner of his bottom lip with his strong white teeth.

“I don’t think this is good, Neil. Kevin’s too old to believe in a real live actual Santa Claus.”

Kevin kept getting tangled up in worrying so much about Tony’s brain injury he treated the big Italian like a child.

A situation that did favors for none of them.

“Yeah, Neil, that’s just what I thought, too. It don’t make no kinda sense for a smarty like Kevin to still think Santa’s real.”

Tony’s thick black brows rose as high as they could go.

Neil fought down the desire to find Kevin and ask what the hell he was thinking. Tony was a grown man, and Kevin was needlessly worrying the shit out of him. Neil cleared his throat.

“Tony, what do you think we should do about this situation?”