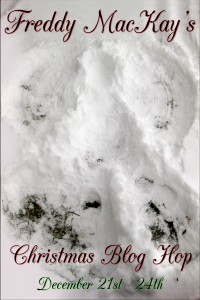 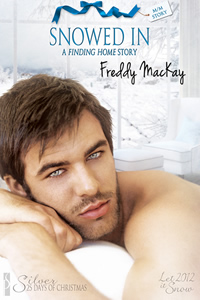 Snowed In by Freddy MacKay

When their families celebrate Christmas at his parents’ cabin, George receives one request from his boyfriend’s little sister, Courtney—break up with her brother. George is devastated that the cute as a button high school freshman has gone from loving to hating him with no explanation as to why, and insecurities about his relationship with Max rear their ugly head.

Max tries to distract and comfort George, but Courtney becomes more hostile and less festive by the minute, upsetting everyone in the house. George leaves to do some last minute shopping and to give Courtney some space only to run into his ex-boyfriend, which further complicates everything.

Sometimes mixing Christmas with family is a toxic combination.

“Are you sure this is okay, Kyle?” Max asked for the hundredth time, even as he packed his suitcase. “We don’t have to switch.”

George smiled, he wanted to agree with Max, but he knew Kyle had been right to suggest flipping rooms. Staying next to Courtney’s room would be a mistake, especially after her tantrum downstairs. They needed to move so the rest of the week would—hopefully—run more smoothly for everyone. The cabin was a decent size and the walls were thick, but not thick enough or big enough at the moment. The space felt enclosed and suffocating, something George never imagined himself feeling in his own bedroom. They needed to get out and away before more damage could be done. That thought alone created a chasm deep inside George, playing at his greatest worry—losing Max—and he didn’t want to taint his room further with unhappy thoughts and concerns.

His old room held a lot of memories for him. All of them good and exciting but, unfortunately, Courtney’s hissy fit had contaminated his youthful innocence and wonder. George looked around, trying to recapture pleasant memories, molding them back into something acceptable. Geeky science posters, pictures, specimens, and awards cluttered the space, his room virtually untouched by his parents except for little changes here and there.

As soon as someone walked into the space the closet could be found to the right. The folding doors looked new so his parents must have replaced them recently. They had also removed the twin bed he grew up in and put a queen in its place, making the room a tight fit. At least they’d put it where he’d kept it in his youth.

George didn’t like the idea of his room changing too much. The consistency calmed him and made him feel welcome, something Courtney had nearly ruined.

His desk and shelves lined the wall connecting to his parents’ room while his bed was pushed into the corner on the opposite wall under the window. Which meant his bed was against the wall it shared with the room Courtney stayed in. Grimacing, George shook his head.

George hadn’t said it, but another factor influenced his agreement to the move. He didn’t know how comfortable he felt sleeping next to someone who hated his guts. And Courtney loathed him very much at the moment. Why, George didn’t know, and he ached not knowing.

He pulled Max into his arms. “No, we need to go. Throwing us in Courtney’s face won’t help matters.”

“But we shouldn’t have to pack up and move just because she’s being a twat!” protested Max.

George winced at Max’s name calling, wishing his lover didn’t always go for the jugular when he felt wronged. Or now that he and Max were together, when someone tried to hurt George. Max’s slow-simmering temper and tenacity could be worrisome sometimes.

They had to move to help alleviate the stress, though, so George focused on holding firm about changing rooms.

“Yes, it does,” George argued. “It’s Christmas and the last thing we need is everyone fighting. Besides, I don’t know how I feel about sleeping next to someone who thinks I’m infecting you.”

“Not your fault,” he answered sincerely. “We’re not running away from anything, just compromising, okay? Right now, we need to be cautious on how we deal with Courtney. Tomorrow is Friday. We’ll be out of the house shopping, and hopefully Courtney will cool off. Saturday is Christmas Eve, which means we don’t have time to duke things out with your sister and have everything be hunky-dory. I don’t want Christmas ruined for you or the rest of your family because Courtney can’t handle us together.”

“And for that I love you even more.” George squeezed Max before nudging his boyfriend back to the bed. “Finish packing back up. We’ll talk to your parents in the morning and see what to do next. I’m tired and just want go to bed and hold you.”

Max’s hands stilled and he turned. “You’re serious, aren’t you?”

George nodded. “I’m just kind of numb right now. The whole thing feels surreal, like it hasn’t really happened. After everything I went through with Joe and always having to hide our relationship and then being with you and not, then the attack on campus, and now your sister. It’s all jumbled inside of me.”

George looked down at his hands, knowing he was making a mess of things. He couldn’t put into words what he felt or wanted to say.

He threw up his arms in defeat. “Fuck, I don’t even know what I’m saying.”

He dropped onto the bed and rested his forehead on his palms. He hadn’t made any sense. His mind was completely muddled. Courtney’s tirade against him had really hit him hard. At CRU he could expect that kind of bigoted behavior considering how conservative the campus and community were. He’d just never expected it from someone he considered family.

Maybe that’s why it’s affecting me so much? Why it feels I’m being ripped in two?

“I’m gonna check my room one more time, see if I left anything,” Kyle said softly, the door clicking shut quickly behind him as he left the room, leaving George and Max to themselves.

Max stroked his fingers down the side of George’s jaw, cupping his chin and lifting it up so their eyes met. For a while, they only gazed at each other. George didn’t know what to say to his lover. How could he apologize for ruining the evening? How could he fix his problems with Courtney? George wanted more than anything to forget the night ever happened.

George complied without a second thought, flinging his arms across his face.

Lifting his arms, George’s gaze met his lover’s in query.

“Yes, master,” replied George, teasing before turning over onto his belly.

“Tempting offer, but no, this isn’t about that,” Max answered. “Hm. Maybe I should have thought this through a little more.”

“What?” mumbled George into the covers, trying to find a comfortable way to lie down.

“Take off your shirt,” Max ordered.

George glanced over his shoulder. “I thought this wasn’t about that.”

Max winked and backed off of George. “It’s not.”

Kneeling, he whipped off his shirt before getting startled by Max’s hands circling his waist. He looked down, watching as Max undid his belt with practiced ease and unbuttoned the top button of his jeans.

“I’m starting to think you’re lying,” teased George, waiting eagerly for what would happen next.

“I’m not.” Max chuckled and kissed George’s back. “Now lie down.”

The pop of a cap made him laugh. “Now I’m really convinced you’re lying, M.”

“Moisturizing lotion, asshole,” Max replied scornfully. “I’m going to rub your back. Help you relax before you freak out, though I’m starting to change my mind.”

George jumped when the cold lotion made contact with his skin, but Max’s warm hands quickly followed. Max crawled up on the bed, settling over George’s ass. He rubbed in deep, hard circles then up and down George’s back. He groaned, loving the firm caress from his lover. George arched into the touch and closed his eyes.