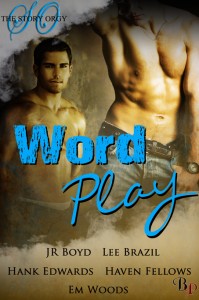 *Knock-knock* Hey, Silvia! I hope you don’t mind, I brought Havan with me and we brought you a sampler basket!

*bounces in and kisses Silvia on both her perfect cheekboned cheeks* He won’t let me peek in the basket! Something about things going missing last time and him having to spend all night fixing it…*eye roll as I hip bump my muse and reach for basket*

Yum! I love sampling and Havan is always welcome here 🙂

Christmas is cookies for me. My mom baked several kinds, but a few years back I encountered a lady who baked a dozen different kinds of cookies at the holiday season for give-away baskets, and she showed me how to do this. This particular cookie *points to chocolate caramel cookie about to disappear into Havan’s mouth* is one of my favorites.

*slips cookie back in basket and hangs head mumbling* it’s not my fault she taught you so well!

You see, these are so easy to make. They’re really just a throw together!

1. Place caramels and evaporated milk in a microwave-safe bowl. Microwave, uncovered, on high until melted (~ 2 minutes) Stir until smooth. Spread caramel over top of cookies. Place cookies on ungreased baking sheets.
2. Top each cookie with a chocolate square. Place in a 225 degree oven for 1-2 minutes or until the chocolate is melted. Spread with a knife. Sprinkle with pecans.

Ooooh 2 Silvia…*bouncing and clapping hands*…we have 2 coming out this month!

And this one is calling my name…it would be downright rude to ignore its plea, and Lee, you don’t like me being rude!  *giggles and snatches chocolate caramel cookie back from basket…takes a bite and sighs in bliss*

Here’s a look at what’s inside this collection!

Yay! I love previews! *cops a squat and snags another cookie…dragging Silvia and Lee down with me*

Ryder made a mistake Harlan can’t forgive. Will Ryder cross a line no man should cross to obtain a second chance?

Ryder Halloway made a life changing decision about his relationship with Harlan when he was young and stupid. Thanks to one rash moment, he lost it all. He lost the only man he would ever love, his drive to even try to finish college and his zest for life.

Seven years later finds him in front of Harlan’s house preparing to take back what he lost with a vengeance. He’s prepared to use all the tricks in his arsenal to plow through every wall, protest and excuse Harlan might come up with.

Of course, he never expected Harlan to put him in the hospital …

Harlan Mychels had his heart broken in college by the popular Ryder. He learned his lesson about love and since then hasn’t allowed anyone even remotely close to his heart. Then one morning he turns and sees the one person able to tear his walls down and destroy what is left of it.

He uses every defensive tactic in his possession to keep Ryder at arm’s length, but Ryder is persistent. Harlan’s not sure if he can stay safe from heartache … and he starts wondering what the real heartache is – letting Ryder in again … or letting him go for good.
Em Woods
Harper’s Discovery

When Harper finally sees the light and dumps his cheating boyfriend, can Pitt convince Harper to trust him enough to let it all go?

When Harper Evans discovers his boyfriend in yet another bar with yet another Joe, he makes the final break and kicks him out. More relieved than heart-broke, Harper turns his attention to the letter burning a hole in his pocket that could mean a fresh start across the country.
Pitt Mullen has been looking for just such an opportunity and pounces on it – and Harper – when it shows up. But not everything is as it appears. When Pitt gets a late night call and rushes to another, will Harper understand or cut his ties before he listens to the truth?

Kirk Stanford’s realtor never mentioned certain features of his new home during the walk through, such as mysterious rooms and brutal secrets. All Kirk knows is he has a lot of unpacking to do and a handsome, bad boy neighbor seems to have taken an interest in him.

But then the warnings begin to appear, written in steam on the bathroom mirror. At first, Kirk dismisses the messages, but when a prowler attempts to break into his house, and a handsome private detective shows up asking questions about the murder, Kirk realizes how much danger he is in. He’s invested too much money in his new house to just walk away, so his only choice now is to figure out for himself who the murderer is and what he still wants out of his house.

Dark secrets come to light and Kirk is forced to put his trust in a supernatural presence as he fights to survive.
Lee Brazil
The Park at Sunrise

First they were three, now there are two.
Can Jason and Morgan make a relationship work without Paul?

For years the three of them had been inseparable, first as friends, then lovers. It’s been ten years since they parted for what was supposed to be a year apart to pursue their dreams. This isn’t the reunion they planned then. It’s nine years too late for one thing, and they are one man short for another.
In the years since Paul’s death, Morgan hasn’t exactly been waiting for Jason to reach out to him. He’s been too busy trying to forget, to move on. Until Jason sends the right message. Is the painting just an excuse to see his ex again?

JR Boyd
Off the Beaten Path

Best friends, Mitch Sterling and Colby Merritt have spent their whole lives together in a small town in the Hill Country of Texas. At twenty-four, the two entrepreneurs run a small landscaping company. Mitch works out in the field, leading the landscaping crews and getting his hands dirty. Colby uses his college education to handle the business aspect of the company from their office.

Outside work, the two can always be found together. A Saturday morning drive leads them to a dirt road that neither has ever traveled. With the help of a few beers, the hot Texas sun, and a secluded country pond, Mitch and Colby find themselves exploring new territory Off the Beaten Path.

To learn more about Lee and the rest of the Story Orgyists, check out Lee’s blog.