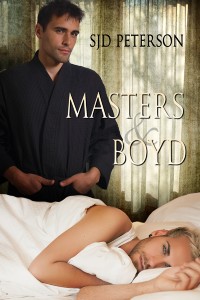 Masters and Boyd by SJD Peterson

Carrick Masters and Edward Boyd have already found true love—it’s the happy ever after that’s eluding them. Between Carrick’s job as an orthopedic surgeon and Ed’s career as a defense attorney, they have hardly any time to spend together, and what time they do have seems to be poisoned by resentment. Carrick and Ed know they need to refocus to make their marriage work, but they seriously need more than a spicy once-a-week date night to get them back on track.

THE opulent ruby-red décor glimmered softly under the glow of two huge open fireplaces. A quintuplet of dazzling crystal chandeliers looming majestically overhead reflected the light, causing it to dance in the intimate two-tiered dining space. Swirling the dark purple wine around in his glass, Edward Boyd inhaled deeply, taking in the aromas of blackberry, plum, licorice, and spice. Raising the glass to his lips, he took a small sip. Concentrated berry and pepper flavors with a silky feel danced across his tongue. Delicious.

No matter how wonderful the atmosphere at Acapella, how impeccable the staff or how perfect the wine, Ed simply couldn’t enjoy it with his heavy heart. Three years he’d been with Carrick Masters. Three years of living, loving, and building a strong and solid relationship. Tonight was to be their celebration of those three wonderful years, and yet here he sat alone.

Ed had made the reservations, confirmed schedules, and made sure every minute detail was taken care of. He’d even laid out Carrick’s attire for the evening on their king-size bed: a dark blue Armani suit, a blue jacquard monogrammed French-cuffed dress shirt, Carrick’s favorite gold and sapphire cuff links, black Ferragamo lace-up shoes with a matching belt, and a gold-and-navy silk tie. In addition, since all finely dressed men wore T-shirts under their dress shirts, and Carrick would be looking fine, he had remembered to lay out silk boxers and a T-shirt to keep him looking fresh. His lover had been working himself to exhaustion, and Ed had hoped that by planning everything right on down to Carrick’s attire for the evening, there would be nothing for Carrick to worry about.

Ed’s chest tightened painfully as he glanced down at his watch. He’d been waiting for Carrick for forty-five minutes and finally had to admit that worrying about Carrick’s ensemble should have been the least of his problems. Insignificant worry compared to why my husband stood me up on our anniversary.

After paying for his wine and leaving a sizeable tip, Ed gathered up the small box and card he’d placed on Carrick’s salad plate and made his way out of the restaurant. He waved off the door attendant, who had opened the rear door to a waiting taxi.

“Thanks, Carl, but I think I’ll walk home tonight.”

Ed waved his goodbye without turning back and headed down the nearly deserted sidewalk. There was a chill in the air, and he hoped that the quiet walk and cool evening temperatures would help clear his head, though he doubted that any amount of walking would relieve the heaviness in his chest or the sting in his eyes. Christ, had it only been three years since he married Carrick Masters? It seemed like just last week that the most stunning man he’d ever seen had taken the seat next to him on a bench outside St. Mary’s Hospital and met his gaze with twinkling hazel-green eyes. As he walked, his mind traveled back in time.

Good Lord, the man was gorgeous. His disheveled short brown hair stood out in a hundred different directions as if he’d been repeatedly running his hands through it. The stranger had a strong square jaw with dark stubble, high cheekbones, and thin lips. Wide shoulders filled out the blue surgical scrub top, tapering down to lean waist, the bright red drawstrings of his scrub pants catching Ed’s attention. One little tug of the string….

Ed gathered his wayward thoughts, cheeks heating as the man took the seat next to him and extended his large hand. “I’m Carrick.”

He’d never forget that first moment when his and Carrick’s hands had touched. A jolt had shot through him as the skin of their palms met, each man’s grip tightening as sure as the tightening in his groin and their gazes locking. His dad’s mishap with a circular saw—okay, so nearly cutting off a hand was probably a little more than a mishap, but thanks to dear ol’ Dad’s carelessness, he’d met the man of his dreams while sitting out in front of St. Mary’s Hospital as the surgeons worked to save Jonathon Boyd’s hand. To this day, one touch from Carrick still sent a jolt through him.

Their lives had been crazy back then, Carrick in his third year of residency in the surgical program and Ed in his final year of his Juris Doctorate degree. Yet no matter how busy, they always seemed to find time for each other. Some days their time together was measured in minutes rather than hours, but they had always been thankful for each occasion and cherished each opportunity, giving each other their sole focus while they were together, counting the minutes until they could be together again. Even in the limited amount of free time Ed had, Carrick always made him feel special.

Ed rubbed absently at his chest as he made his way down Seventh Avenue. Their lives were still busy—his husband was in the fellowship program, specializing in pediatric orthopedics. Carrick only had a few months left. He’d soon be joining a very well-known and successful orthopedic group, and Ed was now a junior partner in his dad’s law firm. Soon school would be behind them and their lives would become more manageable, time-wise, and yet Ed wasn’t so sure anymore that their relationship had endured the stresses. He certainly didn’t feel special anymore.

Reaching the row house he shared with Carrick, Ed ran a finger along the black wrought iron railing as he took the steps up to their front door. A smile crossed his face as he remembered a happier time, the way his much larger lover had lifted him into his arms and carried him up these very steps the night of their commitment ceremony. If he concentrated hard enough, Ed could still hear their laughter, could still see the love and happiness that had shone in his lover’s eyes. His chest tightened. God, I miss that look.