Today I’m participating in the Autism Blog Hop and I’m offering two ebooks from my backlist as a prize.

Fact: Autism affects the way a person communicates with, and relates to, other people. It also affects how they make sense of the world around them.

Communicating effectively can be a challenge for anyone. Sometimes you want to say something but you worry that the person you need to talk to will take it wrong or that you will hurt them. Or you might be traveling in a country where you don’t speak the language and you’re not sure if a few basic words and hand gestures will suffice to help you find what you need. As a writer I have stories in my head but I’m never sure if I’m going to be able to find the right words to tell that story to others and have them see it as I do.

Every human being has a unique perception of the world around them and we can’t always communicate what we see or feel to others. But those challenges we face are magnified many times over for those who have autism. For them, even the most basic communication with others may not be possible or may bring on so much frustration that they stop trying. Many years ago, I worked in a preschool and one of the boys in my class was autistic. You could see the frustration build as he attempted to interact with other kids. Most days he ended up pulling at his hair and kicking because the challenge was too much for him. I wanted so badly to help but I couldn’t see the world the way he did. It’s so easy to judge someone when they don’t react or behave as we expect—and I’ve certainly done that many times—but we never know what challenges that person might be facing. 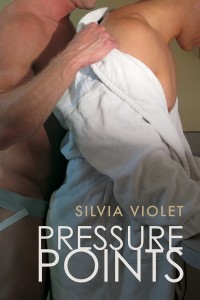 My latest release is Pressure Points, Book 2 in the Pisgah Mountain Wolves series.

Despite Carl trying to put him off, Justin won’t give in. Carl’s friends won’t leave him alone, and the divisions in the pack are near exploding. And it’s tourist season. The last thing Carl needs are wolf wars in the lobby. Like it or not, Carl is going to have to rely on Justin and the wolves who love him to teach him how to let go and get through everything without falling apart.

You can find Pressure Points at Dreamspinner, Amazon, ARe, and BN