Today we are joined by sexy, charming, fellow erotica writer, Xavier Axelson. He’s got a post that touches on topics even I find shocking. Be prepared….. 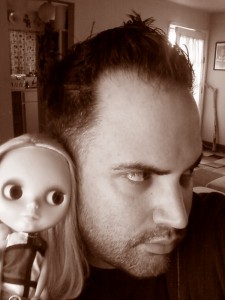 I work in a world where I am confronted daily with any number of people’s kinks, fetishes, fantasies, and perversions. Mostly I have heard or seen it all before.

Let me take you back to 1998. I was in college in Boston and actively working as a dungeon master, phone sex operator and had some BDSM clients on the side. It was about this time that I saw a documentary about a dungeon in New York. I think the film was called, “Fetish”.  It explored the dungeon and it’s clients and the women who worked there. It made me begin to realize how complicated people and their sexual/psychological needs can be. As the film progressed, it revealed an African-American male who had an elaborate slavery fetish, and a Jewish man who had a concentration camp fantasy, and so on and so forth.  I found these revelations disturbing but also fascinating.  Were these people out of their minds or simply confronting buried sexual and psychological fears?  I was only 19 at the time so I really can’t say that my sense of sexual psychology was anything more than fascination.

After having worked now for over 15 years in the adult industry I can honestly say I have gained some insight into human sexuality. I believe as long as it is safe and consensual, let your freak flag fly and explore your deepest fears, fantasies, and fetishes.

But let me tell you about a recent customer I had, Captain Salty.  The first time I encountered him was when I had to help him into a corset.  He’s an older man, possibly 65?  Maybe a little younger. He reminds me of an out of shape Popeye, particularly because he cannot speak above a mutter.

Upon our first meeting, I noticed he had a strong body odor and I distinctly remember he was sweating so profusely that a drop of his sweat hit my hand as I tried to zip up the front of the corset. I also noticed he looked beaten up, but I was so overwhelmed by the smell and the sweat that I wanted to get away from him as quickly and politely as possible, and I didn’t have the time to study his wounds.

When I encountered him the second time a co-worker whispered that he also wore an incredible amount of rope tied around his cock and balls. I wasn’t surprised. When I asked how my comrade knew this they explained that they had helped him try on a pair of pants and was exposed to the roped mess down below.  I also noticed this time he looked beaten up and haggard again, with some bruising on his face. The third time I saw him he came in wearing skin-tight bike shorts, a t-shirt advertising a local leather bar, and this time his eye was bruised, swollen, and sealed shut. He looked like he may have also had his nose broken. The shorts were also stained as if he had either peed himself or, who only knows.

We all expressed our concern about Salty to the higher ups and were always told, “Oh, he’s harmless. He’s been in the scene for years.” And maybe he is. He isn’t the first smelly, fetishist I have encountered and won’t be the last.

Now it was maybe a month later that another comrade had to deal with him, and this is where I believe his fetish broke the surface.

It was a Saturday night and Shortberry Strawcake was working alone. Salty came in and proceeded to browse near the back of the store. Next, a straight man and woman came in to browse. After a few minutes there was an eruption of noise. The couple were running towards the door. The man was enraged and was calling out threats behind him. The girlfriend told Shortberry that Salty had asked them if they liked to have sex with little boys. Shortberry confronted Salty who of course denied it all. The man was getting more and more enraged. Shortberry threatened to call the Police, and things settled down. The couple left the store, but Shortberry noticed they were parked just outside and they weren’t leaving. Strawberry believed the man was waiting outside to kick Salty’s ass. Wisely, Salty waited until they left to leave the store.

So here’s my hypothesis:  I believe Salty goes around and says things like he did to that straight man, with the express desire to get his ass kicked.  When I said this to Shortberry, her eyes got wide and suddenly all the dots began to get connected.  Was this the reason he always looked like he had just gotten an ass whooping? Was this Salty’s fetish? To say something so horribly wrong, that he gets his ass kicked?

Now mind you, I could be completely wrong.  It could be he just likes to say perverse things to people and gets off on shocking them. Or maybe he feels less of a man because of his sexuality and needs to be beaten by what he feels is a “real man”?  The possibilities are endless.  Painful, disturbing, and endless. The more I discussed this with Shortberry the more I began to wonder about self-loathing and how powerful this emotion truly is.  Did Salty hate himself, his cock, his balls, his sexuality so much that the only way he felt good about it was to punish all the parts of himself that he felt were related to it?

Shame is a powerful motivator.  Being a deeply empathic person it is not easy for me to work in the world I do. I shut the empath off before I go to work. If I didn’t I would go crazy.  Of course I feel sorry for Salty, I feel bad even if everything that I think is going on with him isn’t. Maybe he’s just into being tortured and beaten, there are plenty of people out there who are. It may be that he simply is aroused by the situation that saying such things puts him in.  I also believe that there is not an ounce of me that feels I have misjudged this one. If a Jewish man can fantasize about being in a concentration camp then surely there are Gay people out there who might fantasize about getting bashed.  Is it sick?  Who am I to judge. This is beyond my realm of understanding.  We all live in our own worlds. Like any geography there are borders and those brave or foolish enough to go exploring beyond those borders. I just don’t need to be exploring all of them.

I mention this because it is rare for me to be jolted from my happy place in my little English cottage where the hollyhocks grow and where I firmly position myself most days while helping a woman tuck her tits into latex  Captain Salty shook me right from my cottage and I felt it only fair to purge him from my happy place and get back to enjoying my back porch. Lucky you!

Oh by the way…did you hear?  I have two new books coming out:  “Lily” with Silver Publishing and “The Good Cop” with Seventh Window Publications.  Feel free to also stop by my examiner.com column and say hello…fuck off…or send me a recipe or cookies…whatever you dish I can take… or come by my website!