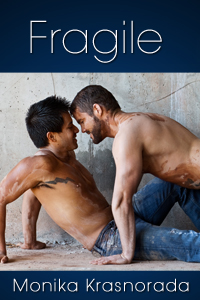 Today I welcome Monika Krasnorada to my blog. Monika is a good friend and an awesome author so grab some coffee or tea and settle in to learn more about her. Monika, tell us about your latest story.
At this time, I am still a newbie.  I have had only one release, the novella “Fragile” that was included in Dreamspinner Press’ Daily Dose Anthology, “First Time for Everything”.  And, that was a fluke, let me tell you.  A friend suggested I send in a story I had written and it was one of those ‘holy crap’ moments.  A writer I admired thought I should ‘go for it’? What a boost to the ego that was.  So, I did and hello! They accepted it.  I’m still on cloud 9. : )

I’m currently working on two novel-length stories.  It’s slow going, but I’d rather take my time and do my very best the first time around and hopefully not have to re-do the entire thing in edits.

I love m/m.  I’ve been writing in the genre since I was about 13.  I used to write fanfiction before I even knew there was such a thing. LOL  And, I always, ALWAYS put my guys with other guys. It wasn’t a conscious decision on my part and at that age, I’m not entirely sure all I knew about that kind of relationship and what it entailed, but it just seemed right to me…natural.  It just made sense to me.

I have written m/f, as well.  Actually have just submitted a 100+K m/f novel and am now anxiously waiting to hear back about it.  It’s a special story to me and I am hopeful it will be accepted even due to the fact that it doesn’t have an HEA.  But, I figure, life doesn’t always end that way and why not reflect that? (Doesn’t help the nerves, though) 😛

Do you have a  favorite character from one of your books?

Actually, I do. In the novel I am working on now, there is a character named Leo MacGregor. He’s this bigger than life guy. You know the type, drop-dead gorgeous with a Scottish burr (could you not just die?).  But, his past is a secret, and he’s been hired to provoke and root-out some very unsavory characters.  In the process, he’s met a man that he will have to betray.  It’s amazing to watch him open up and feel things that he hasn’t been allowed to feel for a long time. To watch him realize there is more to life.  He’s just a doll.

Hmmm, I’m not sure.  I don’t intentionally write anything, so I guess I am at the mercy of my muse.  Whatever he decides to have me show, I’ll do it to the best of my ability.

That was definitely a problem over the summer.  This year has been the first that I have really tried to be a ‘full-time’ writer and I didn’t realize how much I took my alone time while the kids were in school for granted.  So, I wasn’t very successful on the writing front over the summer.  Now they are back to school, and I those kid-less hours are completely devoted to writing. Well, when RL isn’t kicking my ass, that is. 😛

I’ll read anything. Contemp, sci-fi, paranormal.  Just one stipulation-it has to be well-written.  I do have some favorites that are have-to-have’s no matter what: Aleksandr Voinov, Hank Edwards are my tops in the m/m genre. Of course, I am a sucker for the BlackDagger Brotherhood and love JR Ward.

Living where I do, it’s almost a sin not to spend any ‘off time’ in the mountains.  So, that is probably where you would find me.  Pack up the kids and the hubs and wind up at Cades Cove, have a little picnic and hike or explore the cabins there.

A perfectly rare piece of prime rib with fresh horseradish, spicy Spinach Maria, a fluffy baked potato with a little butter and grilled Romaine.  Simple but the most delicious tastes. Yum. Is it dinner time yet? : )

If you were a dessert what would you be and why?

I would have to say Chocolate Lava Cake.  Not quite done on the inside. : )

Dr. Andy Jameson considers the job of team physician for a regional college football team to be the perfect prelude to a specialized residency. But tending to injuries suffered during the brutal, full-contact sport is nothing compared to the injury he inflicts upon himself by falling in love with the ruggedly handsome head coach, Erik Sheridan. Andy’s content to love from afar until he literally sees the writing on the wall—a message hastily scrawled on the coach’s bathroom mirror—and realizes his last night on the job could be just the beginning of a life with the man he loves.

“Doc, you look as tired as I feel.” His voice was deep and scratchy, as if he had been talking too much, though it was probably due more to the emotional overload. He nodded his head toward the stack of papers lying on the desk in front of Andy. “You about finished there?”

Andy’s head bobbled like one of those dolls as he continued to stare up at the man standing in front of him. He must have looked like an idiot, but he was too tired to care. These were the last few moments he’d be in the coach’s presence, and he was going make the most of them.

Andy cleared his throat when he noticed the half-smile the coach had on his face, bringing him back to reality.

“I just need you to sign off on them, here.” He began shuffling the papers nervously, searching to put the ones on top that needed the coach’s signature.
He nearly jumped out of his skin when the coach’s big hand clasped his shoulder. “Bring them inside; we’ll take care of them.”

The warmth of the Coach Sheridan’s palm remained even after he turned to head into his office, leaving Andy to snatch up the papers and follow him.

“It’s been a helluva day,” Coach Sheridan offered, closing the office door as Andy followed behind him. The coach hung his suit jacket on the back of his desk chair before collapsing into it with a heavy sigh. He shoved his fist through his salt and pepper locks, pulling on them in complete frustration. “A helluva day.” He laid his head back against the leather of his seat, his eyes closed, every line of his body echoing the tiredness that was etched onto his face. “That was a career-ending injury.” His voice was barely audible, stretched thin with pain. “Just a kid and his dream could be over.”

This was one of the aspects of the coach that made him so attractive to Andy. Beyond the rugged good looks and the swagger of a man who was keenly aware of his appeal to those around him, he had compassion. To the outside, these players were nothing more than athletes chosen to increase the odds of the team making it to a post-season bowl game, but to those who were lucky enough to see inside the locker rooms and to be present at practices, these were the coach’s kids.

In his late forties, and having never been married, he took these players under his wing. He was always there for them to lend an ear, offer support, to give advice. Those kids looked up to him, and the mutual respect they had was the reason the football team played so consistently well.

Andy didn’t know what to say… what to do. He sat down in the opposite chair, forgetting the papers for now. “Is that what they said?” he asked quietly, wishing now he had gone to the hospital too. A lot of truth was in what the doctors didn’t say.

The coach sat up with a groan, rubbing his hands roughly against his face, as if trying to fight the exhaustion he had to be feeling after such a long day. “You know how doctors are.” His smirk made Andy’s stomach flip. “Cautiously optimistic, they say. But you saw it, hell, we heard it, out there on the field. If the surgery is successful, you know how fragile that knee will be from here on out. This was his last year, this was his last game….” He left the thought hanging as he reached across the desk for the papers awaiting his signature.

“Lot of lasts happening tonight,” he offered quietly as he absently signed off on Andy’s reports without even reading over them. “ Not a great send-off, is it?” He smiled, signing the last one and putting his pen down before deftly pulling his tie from around his neck. “You are now no longer an employee of the university.”

“Well, not the Athletic Department, that’s true.” Andy offered a tired smile. “It’s been great working with… the team. And, you, of course, working with you.” He stumbled over the words, nervously working them in. He mentally shook himself, but it was hitting him—this would be the last time he’d be in the presence of Coach Sheridan.

“Yes, great.” The coach gave up a killer smile, slapping his hands on his thighs before he stood up. “And what kind of bon voyage has this been? We need a drink.”