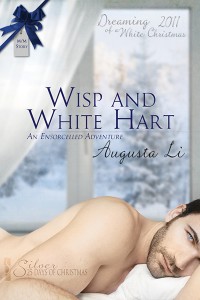 Hi Silvia! My name is Augusta Li (Gus), author of Wisp and White Hart, part of the Dreaming of a White Christmas anthology at Silver Publishing. Among other things, Wisp and White Hart is the story of two young men, Dust and Elijah, who are estranged from their families and are all each other have. They find their way to an inn in rural Yorkshire on Christmas Eve, and decide to start their own holiday traditions, including a delicious regional meal. Elijah, a former cook, wishes he could prepare a holiday dinner for his partner. He misses cooking and baking cookies. So, in the spirit of family and tradition, here is the recipe for my grandmother’s almond cookies. Read on for an excerpt from the book!

1.Preheat oven to 325 degrees Fahrenheit (162.5 degrees Celsius).
2.In a large bowl, sift the flour, baking powder, baking soda, and salt. In a medium bowl, use an electric mixer to beat the butter or margarine, shortening, and sugar. Add the egg and almond extract and beat until well blended. Add to the flour mixture and mix well. Note: The dough will be crumbly at this point, but don’t worry – that is what it’s supposed to be like.
3. Use your fingers to form the mixture into a dough, and then form the dough into 2 rolls or logs that are 10 to 12 inches long. Wrap and refrigerate for 2 hours (this will make it easier to shape the dough into circles).
4. Take a log and lightly score the dough at 3/4 inch intervals so that you have 15 pieces and cut the dough. Roll each piece into a ball and place on a lightly greased cookie tray, approximately 1 1/2 inches apart. Place an almond in the center of each cookie and press down lightly. Repeat with the remaining dough.
5. Brush each cookie lightly with beaten egg before baking. Bake for 15 minutes to 18 minutes, until golden brown. Cool and store in a sealed container.

Being stranded in rural Yorkshire on Christmas Eve offers Elijah and Dust a romantic vacation from their dangerous work, until a strange man with unfathomable motives appears in need of their assistance.

A waning, gibbous moon peeked from behind the thick mantle of snow clouds now and then, accentuating a jut of limestone, the crumbling ruin of a Roman wall, or just a gentle knoll or valley. Fat flakes of snow spiraled lazily down, gradually covering more and more of the Yorkshire landscape. A mottled gray sky stretched toward the horizon, making Elijah Tupper feel that the thirty year old pickup in which they rode was driving toward the edge of the world. He didn’t feel uneasy, only humbled. For the last several hours, he’d watched in wonder as the rugged beauty of the Wolds and Dales rolled past. The arched ruins of medieval abbeys and priories stood black against the luminous expanse of clouds. Stretches of woods cropped up and faded back into the moor, and waterfalls rushed down tiers of stone before foaming into plumes of white mist at the bottoms. Elijah rested his temple against the passenger window and watched the austere, monochromatic vista. Snowflakes dissolved into shimmering droplets where they hit the glass.

Beside him, Elijah’s partner Dust looked sleepily through the windshield. An old Yorkshire man in a knitted hat and leather gloves drove the truck. Mr Thomas Whipple had been kind enough to stop when he’d seen the two young men wandering through the inhospitable Dales. He had jowls like a bull dog and eyes perpetually squinted from decades of wind and sun. He was a man of few words, but had offered to give the two men a ride to the nearest village on the way to his farm. He smelled of dried alfalfa and the lanolin from his sheep. None of the three men said much as the old pickup, low on its axles due to the many sacks of grain in its bed, bounced along the rocky paths.

Though he and Dust had spent some time in London, and recently in Leeds, Elijah had never been so far north before. Beneath the snow, limestone, and chalk, Elijah felt a strong but dormant current of magic, like an underground stream. Remnants of Roman sorcery and medieval enchantment braided with the ancient power inherent in the northern land to form a mystic mélange that Elijah felt humming in his bones and teeth. He knew that Dust, a fellow magic-user, sensed the same enchantment.

A few weeks before, a wealthy family in Leeds had hired the two enchanters to investigate their son’s fiancée, a beautiful North African princess. It hadn’t taken long for Elijah and Dust to realize the princess was an ifrit, a desert spirit similar to a djinn. They’d prepared spells to force the creature into its true form and bind it. They hadn’t anticipated for the young man to admit his knowledge of his beloved’s nature, nor for the epic fight that ensued during a dinner party. The two young men had defeated the ifrit and the spirits it summoned, but not without destroying the eastern wing of the family’s ancestral home. Glass and limestone had rained to the street below. The fire that started had quickly spread through the house and to the nearby buildings. Inevitably, the authorities had arrived: fire trucks, ambulances, and an army of police. Elijah and Dust, rather than answer difficult questions, fled the scene. Elijah stole an Austin-Healey Sprite and they drove it into the Dales until it ran out of gas. The snow had started right around then, and they’d continued on foot until Mr Whipple had been kind enough to stop.

They’d left their bags, with all their extra clothing and possessions, behind. Luckily, Elijah had the enchanted katana he’d acquired during his first adventure with Dust, and he knew Dust had at least a few days worth of money in his pocket. Since it was Christmas Eve, it would be some time before they could access any of their accounts.

The old pickup crested a hill and slowly descended into a valley, where around thirty small buildings stood nestled between two high, steep knolls. They huddled around the single, dirt road that ran through the village. Mr Whipple stopped in front of a white-washed structure with a thatched roof and a shingle that read The White Hart Inn and Public House.

“I’ll leave you lads off here, then,” he said in a gruff but friendly voice. Dust shook the man’s hand and offered him a few pounds, which he declined.

“Thank you so much, Mr Whipple,” Elijah said as he stepped into the snow with the brown sack of groceries he’d purchased when they’d stopped at a small market after the Sprite ran out of fuel. He’d been it carrying for miles when Mr Whipple showed them charity. “Have a Merry Christmas.”

“Same to you, lads,” the man said before he shut the passenger door and drove off, his tires leaving gray ruts in the otherwise virgin snow. When he’d gone, the village was so silent Elijah swore he could hear the fall of the flakes on the old buildings. If magic had run like rivulets beneath the rest of the landscape, beneath this small town it pooled in a vast reservoir. Elijah felt it purr and pulsate beneath his sneakers, the power tingling up his legs. He looked at the pub. An inviting light spilled from its windows of beveled, amber glass.

“This is probably the only place in town,” he said to Dust. Melting snow sparkled on Dust’s black hair and thick eyelashes, and the cold had nipped his golden cheeks dark red. Elijah squeezed Dust’s wrist. “Let’s go inside. I’m hungry.”

“Me too,” Dust agreed, opening the two dark, wooden doors and holding one for Elijah. The White Hart’s interior was warm and cheery, lit by old wall sconces and a healthy fire in the stone hearth. Dark paneling, similar to the wood of the doors, covered the walls and floor. Ivy, holly, and red tapers decorated the tables, and evergreen wreaths with red velvet bows adorned the walls. A large, L-shaped bar stood at the back of the room, though no patrons occupied the wooden stools around it. The glasses and bottles of liquor twinkled, and a savory smell drifted from the kitchens beyond. Dust inhaled deeply and smiled before he approached the elderly couple drying pint glasses together.

“Good evening,” he said, as Elijah stood a few feet back. “Are you the proprietors?”

“Aye,” said the gentleman, eying them with a bit of suspicion.

Elijah knew how they looked. Dust’s long, black hair was pulled back in a ponytail, though a few loose strands clung to his damp cheek, and his light, silver eyes looked out of place on his dark, Asian-featured face. Often people sensed Dust’s otherworldly nature and felt uncomfortable. Elijah imagined he probably looked a little rough himself, with his unruly, blond hair hanging to his shoulders beneath his heather-blue, knitted cap with the pom-pom and two days worth of stubble on his face. He remembered the elaborate sword he wore on his back. Also, their American accents marked them as outsiders. Luckily, Dust knew how to charm and manipulate people when he needed to: he’d had centuries of practice after all. If all else failed, Dust could employ a simple charm to gain the trust of the pub owners. Slipping his hat off and sticking it in his coat pocket, Elijah left Dust to it and found a table close to the fire. He observed the old tin signs that decorated the walls and the porcelain angels on the mantle as he listened half-heartedly to the exchange.

The Hart had three rooms to rent, and since there were no other guests, Elijah and Dust would have the best. The man poured two ales and gave Dust a key while his wife went to prepare some supper for her young guests. Dust brought the drinks to the table and sat down across from Elijah. He looked around at the stuffed animal heads: stags, boars, foxes, and wildcats mounted on wooden plaques. “This isn’t too bad,” he said with a smile. “It’ll be like an adventure.”

“It’s kind of romantic,” Elijah agreed, sipping the foam from his ale and looking at his partner’s face in the low, golden light. He liked the content smile on Dust’s full lips, liked that he saw it more and more lately. “At least we’re safe. Those were some bad times back in Leeds.”

“Yeah. We couldn’t have known.”

Taking another deep gulp from his glass, Elijah said, “Did we do the right thing, killing the ifrit?”

“It was self-defense by then,” Dust assured, draping his hand over Elijah’s knuckles. “She would have killed us.”

“But she loved that man, and he loved her…”

“He claimed to,” Dust corrected. “He might have been under a powerful spell.”

“Or he might not,” Elijah said. “We didn’t know for sure. People used to think you put a spell on me. It’s not impossible that they actually loved each other.”

“It’s improbable,” Dust said. “Creatures like that are masters of manipulating human emotions. I’m sure we did him a favor. We probably freed him from her thrall. I didn’t sense any authentic emotion.”

Though he nodded, Elijah recalled the young man’s grief. He couldn’t help imagining how it would feel to lose Dust. It scared him more than anything, more than death itself. He hated to think he’d caused anyone else that pain.

Also check out these other books in the Ensorcelled series, featuring Elijah and Dust:

Thanks so much for having me, Silvia. It’s been a pleasure. I wish you and all of your readers prosperity and good fortune in the new year!