Hoofin’ it to the Altar now at Amazon, ARe, and BN. 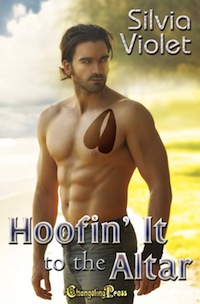 Hoofin’ it to the Altar, my most recent contribution to the multi-author Protect and Serve series, is now at Amazon and ARe and Barnes and Noble.

Reviews for Hoofin’ It to the Altar

“Ms. Violet has the knack for infusing lots of witty humor into the dialogue between the characters. They click as friends and even better as lovers. The storyline was interesting and very sexy. This author knows how to write some hot sex scenes.”
— 4 Hearts from Beverly, The Romance Studio

“I absolutely adore Silvia Violet’s Protect and Serve stories in this multi-author series. She infuses her stories with some humor, lots of lovin’ and amazing characters. The writing is tight, story moves along at a nice pace and there were a few twists that had me flipping the pages quickly to see what would happen next.”
— 4 Hearts from Dawn, Love Romances & More